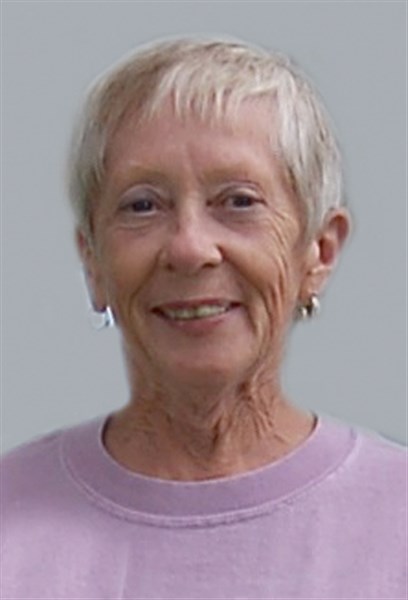 Pauly Burgher, 74, died Friday, September 20, 2013. Funeral services were held Friday, September 27, at Lutheran Church of Hope in West Des Moines. Graveside services were held later Friday at the Clearfield Cemetery in Clearfield, Iowa.
Pauly was born in the home of her parents, George and Lucille Bailey, on February 19, 1939 in Clearfield. She attended school and graduated from Clearfield high school in 1957. After graduation she attended business school in Omaha, Nebraska and worked for Farm Bureau in downtown Des Moines as a key punch operator.  Pauly married Donald Burgher in 1962 and lived in Greeley, Colorado and Walnut, Iowa ultimately making their home in Dallas Center where they raised their two children.  She helped Don run D-C-Boats and was also a nurse’s aide.   Pauly also volunteered at Dallas Center-Grimes schools, serving as a homeroom mom, library assistant and teacher’s aide. She enjoyed crafts, needlework and playing bridge with the Lady Teachers and Teacher’s Wives Bridge Club.
Pauly is survived by her children, Michelle (Jason) Walke of West Des Moines, Iowa and Mike Burgher of Dallas Center, Iowa; her grandchildren, Brooklyn and Brody Burgher and Bailey Walke, and her siblings, Karol Lynn (Dwight) Matheny and George (Linda) Bailey, Jr., both of Clearfield, Iowa. She was preceded in death by her parents, her husband and her granddaughter, Kennedy Burgher.
Memorial contributions may be made to the family for a memorial to be directed later. Online condolences will be welcomed at IlesCares.com.