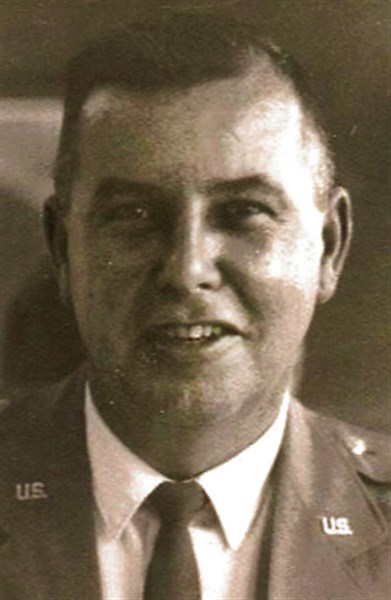 Robert Edward Guthland, Lieutenant Colonel, USAF, Retired, departed to join his wife, Lillian Isabelle Guthland, and his son, David Edward Guthland  in a heavenly homecoming on September 23, 2013 in Independence, Missouri at his home. Bob, as he was known to family and friends, was born October 19, 1927 in Saint Louis, Missouri was adopted by Elizabeth Bernadine Guthland and Edward Guthland at 18 months of age from the Children’s Home of Saint Louis, Missouri. In 1945 he joined the US Navy, was posted to the USS Columbus out of Long Beach, California. In 1947 he was honorably discharged from the Navy and began his university studies at Northwest Missouri State Teacher’s College.
On February 2, 1951 he was united in marriage to Lillian Isabelle Sickels of Mount Ayr, Iowa.  Upon receiving his bachelor’s degree in math, he was commissioned into the Air Force in August of 1952 and attended meteorology officer training at Florida State University. His military career highlights included flying 27 missions through the eye of typhoons when stationed at Anderson Field, Guam, US Pacific Territories. In July of 1973, Lt. Colonel Guthland retired from active duty service after numerous duty assignments at the squadron, wing and command level. His decorations include the Meritorious Service Medical, Air Force Commendation Medal, World War II Victory Medal, Army of Occupation Medal and the Asiatic Pacific Campaign Medal.
After moving his family to Maryville, Missouri and receiving a masters in education, he became the director of Horace Mann Laboratory School which is part of and on the Northwest Missouri State University campus. He served in that role for eight years. During his tenure at Northwest Missouri State University, he also was nominated by Maryville City Council and served as Municipal Court Judge, Maryville, Missouri. Bob was a member of Municipal and Associate Circuit Judges Association and served as its director for over 16 years. Bob was a member of the First Christian Church of Blue Springs, Missouri.
He was preceded in death by his wife, Lillian Isabelle; son, David Guthland, and his parents, Edward and Elizabeth Guthland.
In addition, he is survived by his sons, Rex Guthland and wife Gayle of Waconia, Minnesota and Scott Guthland and wife Tammy of Sykesville, Maryland; daughter, Christine Johnson and husband David Scott Johnson of Blue Springs, Missouri; 12 grandchildren, and four great-grandchildren.
Funeral services followed visitation on September 28, 2013 at the First Christian Church of Blue Springs. Burial with military honors was at Miriam Cemetery in Maryville, Missouri. Contributions in memory of Bob may be made to First Christian Church of Blue Springs, Missouri. Arrangements were entrusted to Meyers Funeral Chapel, Blue Springs, Missouri. Memories and condolences for the family may be left at www.meyersfuneralchapel.com