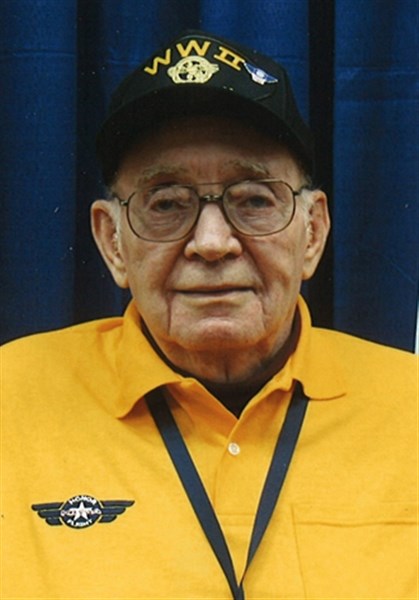 John William (Bill) Rusk, 87, completed his journey Monday, September 30, 2013, surrounded by his loving family. He was born on February 1, 1926 in Newton, Iowa just as the 7 o’clock Maytag whistle blew. He was welcomed by his parents, Opal and Earl Rusk, and his sister, Glendoris. Bill grew up in Ringgold county since the age of six years. He moved to Mount Ayr to join his fifth grade classmates. Bill had three younger sisters, Mary Ann, Patricia and Jean.
Bill graduated in the class of 1944 from Mount Ayr high school. Following graduation, he joined the United States Navy. He was stationed in Hawaii and Guam as a First Class Yeoman for Admiral Nimitz’s headquarters. Bill proposed to his wife, Thelma Anderson, following basic training. Bill and Thelma were joined in marriage June 25, 1946 following his military service assignments.
Bill and Thelma enjoyed raising their four children, Bille Jean, Andy, Scott and Bobbie. Their children kept them busy with all of their activities. Bill was very proud of his children and all of their accomplishments. He was blessed to see them grow to adulthood, get married and provide him with many grandchildren and great-grandchildren.
Bille Jean married Ron Snyder from Diagonal and they currently live In Brooklyn, Iowa. They have two sons, Dan, married Traci, with two children Connor and Carli, and Nate, married to Erin, who have two children, Liam and Jillian. Andy is married to Dotti and they live in Colorado Springs, Colorado. They have one daughter, Courtney, who is married to Aaron; they have three sons, Hunter, Tanner and Spenser. Scott is married to Julie and they live In Manhattan, Kansas. They have three children, daughter Monica, married to Geryd, with two girls, Amelia and Gabby; son Jesse, his fiancée Michelle, and daughter Caitlin. Bobbie is married to Marty Ivey and they live in Galveston, Texas. They have two sons. Doug, who is married to Valerie. and Bill. who is married to Danielle, with two sons. Leo and Ames.
Bill enjoyed carpentry work, which he frequently used while remodeling their longtime residences. He was also very active in his children’s activities such as sports, band boosters, cub scouts, announcing MACH football games, little league and hunting and fishing adventures. Bill was an avid sports fan. He officiated many high school football and basketball games. The highlight of his referee career was when he officiated the Iowa State Girls’ basketball tournament in Des Moines for two consecutive years. Bill was a member of the Mount Ayr United Methodist Church where he was president of the Methodist Men. Bill was also active in the American Legion where he progressed through the ranks all the way to the Iowa State Commander. During his later years, he was instrumental in establishing the Ringgold County Senior Activity Center as a member of the initial steering committee member for this wonderful program.
Bill worked at the Rexall Drugstore as well as helping out his father-in-law, Jesse Anderson, at the Mount Ayr Mill early in his marriage. He was the district manager for the World Book Encyclopedia, which was the internet in hardcopy. He then managed the Skelly Station on the south side of the square. His sons were active in assisting to run the station and worked side-by-side with Bill. He later worked at Don’s Ayrliner as assistant manager. He retired from the Ringgold County Veteran’s Affairs Office after serving for 23 years. He loved his job to assist veterans of Ringgold county to receive their compensation for their service to this country.
Bill was preceded in death by his parents; parents-in-law; sisters, Mary Ann and Glendoris; brother-in-law, Max Anderson; nephew, David Lynn Anderson, and niece, Kelly Walters Liddell.
He is survived by his loving wife, Thelma; children and their spouses; eight grandchildren; 11 great-grandchildren; sisters, Pat and Jean; sister-in-law, Maxine Anderson; brother-in-law, Keith Walters, and cousins, nieces, nephews and friends.
Services were conducted at Watson-Armstrong Funeral Home in Mount Ayr on Saturday, October 5, 2013, with  Rev. Skip Rushing officiating. Eulogy was by Dan Snyder. Musicians included Deb Cannon and Simply Voices.
Casket bearers were Dan Snyder, Courtney Leise, Nathan Snyder, Monica Vandenberg, Caitlin Rusk,  Jesse Rusk, Doug Ivey and Bill Ivey.
Honorary pallbearers included Lyle Hogue, Donald Dailey, John Peters, Bernard Crawford, Royce Dredge, Bob Sickels, Larry Giles, Carroll Wegner, Jim Demarest and Dave Rehbein.
Military rites were by Ringgold Post #172 and US Navy Honor Guard.
Burial was in the Rose Hill Cemetery in Mount Ayr.