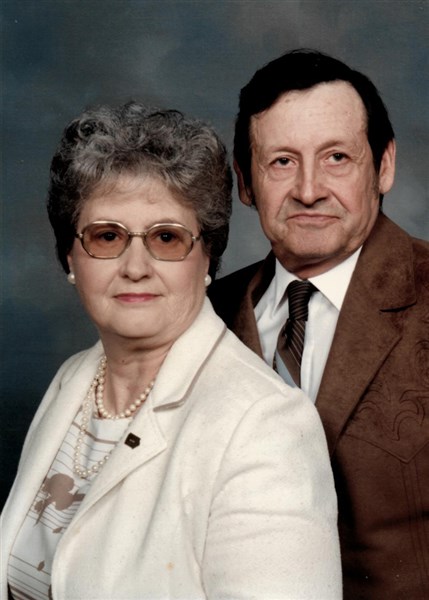 Luetta Lorraine King was born July 17, 1927 in Savannah, Missouri to Lonnie Gilbert and Mary (Brumfield) Cavin and departed this life May 7, 2013 at Mount Ayr Health Care in Mount Ayr, Iowa.          Lorraine graduated from Blockton, Iowa high school. She was active in the Blockton community as long as her health permitted. She was a member of the Methodist church, Eastern Star, American Legion Auxiliary, Garden Club and Sunshine Club. She was preceded in death by her parents; brother, Wesley Eugene Cavin, and sister, Lillian May Cavin.
Edwin Wendell King was born July 4, 1920 to Ray L. and Lois (Remington) King in Hopkins, Missouri and departed this life August 16, 2013 at Mount Ayr Health Care in Mount Ayr, Iowa. He attended school in Hopkins, Missouri and graduated in 1938. He joined the United States Army in 1943 and was in the 150th Battalion, 34th Squadron, stationed in the Philippines and New Guinea. When he returned from service in 1946, he returned to farming with his parents. Edwin was of the Christian faith, a member of the Blockton American Legion, Clearfield Lions Club and Masonic Lodge. He was preceded in death by his parents; wife, Lorraine; brother-in-law, Orlin Florea; nephews, Larry and Wayne Florea, and niece, Lois Janell Florea.
Edwin Wendell King and Luetta Lorraine Cavin were united in marriage October 12, 1946 in Atchison, Kansas. They had over 66 years together. To this union two sons were born. They are survived by their sons, Phillip and wife Merna of Bedford, Iowa and Daniel and wife Esther of Redding, Iowa; grandchildren, Elicia (David) Rople and Heather King of Des Moines, Iowa, Sydney King of LaCrosse, Wisconsin, Christopher (Megan) King of Corning, Iowa and Lacey and Jennifer King of Redding, Iowa; great-grandchildren, Benjamin and Catherine Rople;  stepgrandchildren, Cynthia and Charles; sister, Margaret Florea of Hopkins, Missouri; nieces; nephews, and many friends.
Memorial services for Edwin and Lorraine will be Saturday, October 12, 2013, (their 67th wedding anniversary) at 2 p.m. at the Blockton Christian Church in Blockton.  They will be inurned together at the Rose Hill Cemetery in Blockton.