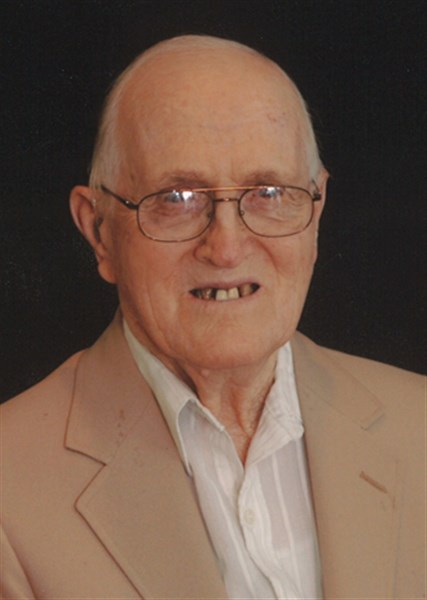 Dwight David Cunning, son of William and Mamie Elizabeth (Nickle) Cunning, was born October 29, 1918 near Clearfield, Iowa. When Dwight was a child, he contracted scarlet fever and lost most of his hearing.
After high school, Dwight lived in Indiana for a couple of years and worked in a fig cookie factory. He returned to Iowa and worked the wheat harvest as well as working on his parents’ farm and helping other area farmers.
On March 2, 1947, Dwight married Charlotte Rice in Lenox, Iowa. Dwight and Charlotte settled on a farm south of Mount Ayr where their son, Bradford Mark, was born on November 30, 1948. A daughter, Sherri Lynne, was born nine years later. Dwight was a lifetime farmer. He enjoyed life on the farm where visiting with neighbors and getting together with family was common. He liked to take trips each summer, usually to national parks where his brother, Duane, was a park ranger. Dwight loved to play pool and would spend free time at the pool hall on the southeast corner of the square. Years later when the Princess Theater was restored, Dwight loved going to the movies. He always attended the Ringgold Singers concerts and was a member of the First Christian Church.
In 1987, Dwight and Charlotte retired into Mount Ayr. Dwight loved his grandchildren and would follow all of their sporting and band activities. He was proud of their accomplishments and enjoyed flying with Mark when he received his small plane pilot’s license. A highlight of his later years was going to Hawaii two years ago to visit Mark and David; a trip he never quit reliving. Jessica’s children, his great grandchildren, became his pride and joy. Dwight and Charlotte moved into Clearview Estates where they enjoyed friends and fellowship with the tenants.
Dwight passed away October 9, 2013. He was preceded in death by his parents; son, Bradford Mark Cunning; siblings, Thelma (Ed) Richey, Burl (Irene) Cunning, Dortha (Ed) Grossman, Cecile (Bill) Barron and Duane (Christine) Cunning; in-laws, Opal (Bill) Goodale, Lewis “Mike” Rice, Paul (Sadie) Rice and Max Brooks.
Survivors include his wife, Charlotte Cunning of Mount Ayr, Iowa; daughter, Sherri (Doug) Hymbaugh of Mount Ayr, Iowa; grandchildren, Jessica (Joe) Snethen of Webster City, Iowa and Mark Hymbaugh and David Hymbaugh, both of Kihei, Hawaii; great-grandchildren, Rori, Vince and Ellie Snethen; sisters-in-law, Betty Brooks of Washington State, Peggy Rice of Lenox, Iowa and Jorene (Bill) Blevins of Springfield, Missouri.
Services were held Sunday, October 13, 2013 at Watson-Armstrong Funeral Home in Mount Ayr with Reverend Chris Conklin officiating. Musicians were Nancy Sackett and Judy Cunning, songs were Amazing Grace and The Lord’s Prayer. Burial was in the Rose Hill Cemetery in Mount Ayr. A memorial fund has been set up for Clearview Estates and the Princess Theater.