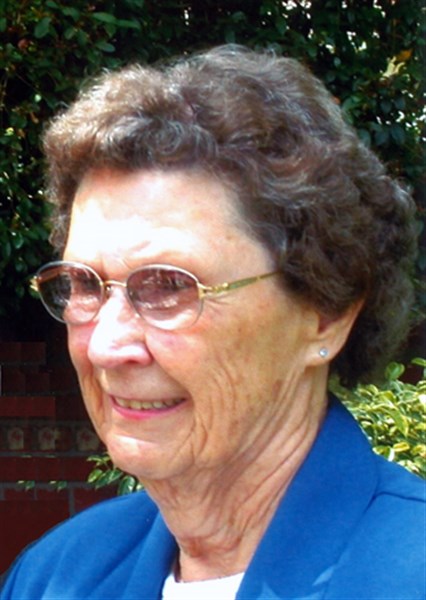 Marie Campbell was born Mildred Marie Weaver on March 3, 1925 in Blockton, Iowa. Her parents were Raymond Weaver and Dicey Fern (Golliday) Weaver, lifetime residents of Iowa. Marie remembered loving moments spent with her mother, but sadly she was only six when her mother died. There was great sadness and confusion at the time of this untimely death and, as the family struggled to reorganize, Marie and her two younger siblings went to live with their father’s parents. Iona, Marie’s older sister, lived with her mother’s family. When Raymond remarried, Marie, her brother Duane and sister Thelma returned to live in the home of their father and step-mother Joyce.
Marie was a good and energetic student and enjoyed school in the Works one-room schoolhouse. She skipped a grade before transferring on to the Blockton school where she completed high school at the age of 16. After school she worked as a child caretaker in the home of relatives. She and Paul Campbell eloped during the next year with the assistance of Paul’s sister, Nina Poore, and her husband, Guy. Paul would soon be serving in the Army as the country was in the midst of WWII.
Marie and Paul had two children, Paulette Kay and Stephen Ray. Marie was happy being a homemaker and was known for her immaculate housekeeping. She was talented at cross stitching and loved taking family pictures and organizing albums. She enjoyed traveling throughout the states and always liked just getting into the car and riding around the local area with Paul. Music always provided fun for listening and dancing, which she always enjoyed. She loved watching people as they did the activities they enjoyed, which made her the perfect support mother/spectator at ball games, band activities, etc. She was always a loving caretaker of her family throughout her life. She valued highly her friendships and relationships with her parents, grandparents, siblings, children, grandchildren, great-grandchildren, nieces and nephews.
Four siblings are now deceased, Iona Force, Duane Weaver, Donald Dean (Buck) Weaver and Faye Weidler. Surviving family are siblings, Thelma Johnson, Fern Leight and Mary Hildreth; sisters-in-law, Virginia Weaver, Mary Weaver and Nina Poore; brother-in-law, Ola (Grace) Campbell; two children, Paulette Clem and Stephen Campbell; four grandchildren, Ann (Tony) Vodacek, Christopher (Jennifer) Campbell, Jeanette (Jay) Brandnor and Douglas (Jenni) Campbell; seven great-grandchildren, Kayla, Mason, Gemma Marie, Trent, Cordelia, Samson and Canaan; two stepgreat-grandchildren, Dylan and Keatyn, and many nieces, nephews and their families. She enjoyed keeping up to date with all the extended family and friends.
Her beloved husband of 71 years, Paul, resides in Mount Ayr Health Care Center. Marie passed away October 15, 2013 at the Mount Ayr Health Care Center.
Services were conducted at Watson-Armstrong Funeral Home in Mount Ayr on Saturday, October 19, 2013, with Rev. Scott Marcum officiating. Vocalist was Jodi Lawrence.
Casket bearers included Douglas Campbell, Christopher Campbell, Terry Weaver, John Weaver, Michael Johnson and Tony Vodacek.
Honorary pallbearers were Larry Weaver, Jim Force and John Howell.
Burial was in the Rose Hill Cemetery in Blockton.
A memorial fund has been established to Blockton Ambulance Fund.

CHARLOTTE J. ROSENGRANT
Charlotte Petersohn Rosengrant passed away on October 11, 2013 at the UCLA Reagan Hospital after a period of declining health. She is survived by her husband, Barry, daughter, Teresa, and son, Edwin, who has a lovely wife and two daughters. Charlotte was raised on a farm near Tingley, Iowa and many cousins, nieces and nephews live in Iowa and Texas. She lived in Los Angeles since 1966.
She was active in horticultural organizations with expertise in African Violets and Gesneriads and over the years served as president of several. She was a wonderful wife, mother, grandmother and aunt and they miss her more than words can express.
Charlotte was born on November 15, 1930 and was the daughter of Otto R. Petersohn and Marjorie (Boyd) Petersohn of Tingley, Iowa.
She was preceded in death by her parents; brothers, Russell Petersohn and Francis Petersohn, and sisters, Dorothy Eighme and Esther Stephens.