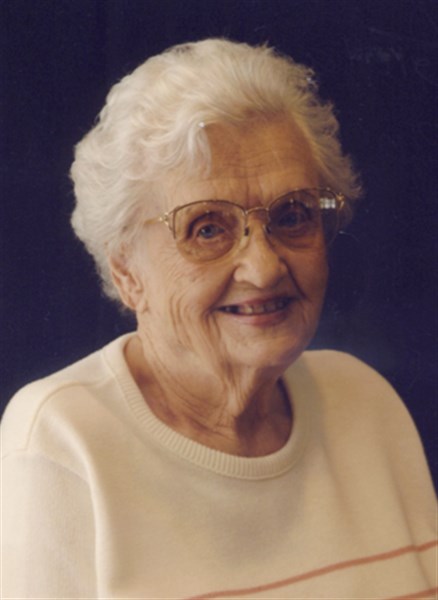 Greta Hawkins Willis was born October 4, 1914, in Decatur county, Iowa to Howard Freeman and Madge (Gammill) Hawkins. She was welcomed by a sister, Adra, and a brother, Max. Greta graduated from Lineville high school with the class of 1932. As with other young women at that time, she went to teacher’s college and taught country school. Greta married Shelby Willis in 1938. They had one son, Francis Edwin.
Greta was a very hard-working lady. While the family lived in Saint Louis, she worked at a department store. When the family moved back to the farm after the war, Greta was a cook at the Pleasanton school. She was also a cook at Leon high school and later was a secretary in the school system. She also worked part-time at JC Penney. After Shelby’s death in 1963, Greta continued her career and became the Decatur county clerk of court. She worked with pride for the citizens of her community and, of course, the Republican party.
Whatever Greta did, she did 100 percent, whether she was keeping the grandkids overnight or setting up for a funeral dinner at the church. She enjoyed her four grandchildren and attended their activities whenever possible for as long as she was able.
Greta was a member of the Loving Chapel Methodist Church in Leon and PEO Chapter W, Leon. She was a past member of Leon Business and Professional Club and Amicitia club.
Greta loved to travel with relatives and friends over most of the United States and Europe. The grandchildren went with Grandma on trips making precious memories at the Indianola Hot Air Balloon championships, Colorado, Arizona and Nine Eagles State Park. The grandkids could not wait for Grandma Greta to get back from her trips, knowing that she always had the best souvenirs, especially the fresh pineapple and coconuts from Hawaii. Auctions and antiques became a passion for Greta. The auctioneers depended on Greta for a bid if they needed one.
The times Greta spent shopping with friends were some of her happiest. She would help out her “elderly” friends who couldn’t drive anymore. (She was never elderly herself.) Greta moved to the Clearview Estates Assisted Living in Mount Ayr in 2007. She continued to make new friends and she entertained them wit her quick wit and spunk. She moved to the Clearview Nursing Home in 2010. She quickly adapted to nursing home life and she delighted the staff and residents while there.
Greta died the same way she lived — with true grit and spunk — at the Clearview Nursing Home on October 30, 2013, exactly 50 years after Shelby passed away. Her final resting place is in Evergreen Cemetery in Lineville, Iowa, beside Shelby and other family members.
Those left behind to cherish her memory include her son, Francis, and daughter-in-law, Elaine, of Mount Ayr, Iowa; four grandchildren, Craig and Brenda Willis of Diagonal, Iowa, Kim and Tony Arnold of Corydon, Iowa, Cory Willis of Pleasantville, Iowa and Cole and Casey Willis of Mount Ayr, Iowa; great-grandchildren, Hagan, Drew and Birk Willis of Diagonal, Iowa, Troy and Molly Arnold of Corydon, Iowa and Keye, Kamryn and Kerigan Willis of Mount Ayr, Iowa; nephews, Cloyd McCarty of Indianola, Iowa and James and Judith Hawkins of West Des Moines, Iowa; nieces, Kay and Greg Horne of Colorado, Janet Hawkins of Saint Louis, Missouri and Alice McFall of Manhattan, Kansas; longtime friend, Marilyn Lesan of Leon, Iowa, and many neighbors and friends in Leon, Lineville and Mount Ayr.
Funeral services were held at the Slade-O’Donnell Funeral Home in Leon on Saturday, November 2, 2013, with Pastor Rick Hawkins officiating. Burial was in the Evergreen Cemetery in Lineville.
Memorials may be given to the Loving Chapel United Methodist Church in Leon in Greta’s memory.