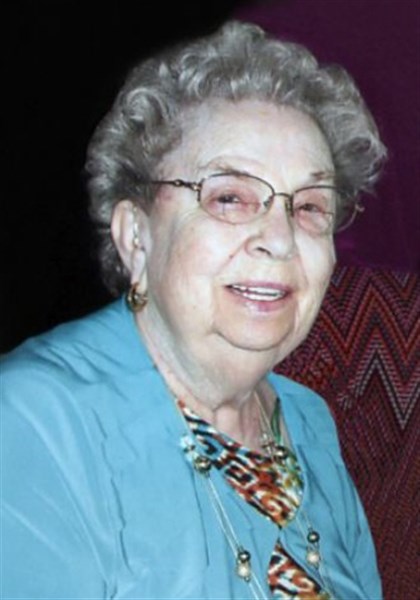 Mary Jane Armstrong, daughter of John William and Marie Evelyn (Kinnan) Frederick, was born November 13, 1933 in Cedar Bluff, Iowa. Janie graduated from Tipton high school in 1950 while still 16 years old. Janie fell in love with Grant H. Armstrong and while Grant was stationed in Boston, Massachusetts, she traveled to him and they were united in marriage on August 16, 1952. Following Grant’s discharge, they made their home in Mechanicsville, Iowa where they raised their five children.
Janie was more than a stay-at-home mom. She was the business manager of Grant’s trucking operation and her life revolved around raising her children and maintaining the household. She had to be many things to her children and she put her heart into all she did. She was a wonderful cook and she had the ability to make a “gourmet” meal out of the simplest ingredients. Saturday snacks of cheese and crackers and Sunday pot roast were her specialties. Janie provided for her family in the form of crocheted afghans. Her children and grandchildren have keep-sake blankets made with love. She always had a big garden and canned in the summer to feed the kids throughout the winter.
In the later years of Grant’s trucking career, Janie enjoyed trucking with him and stopping along the way to enjoy life. She was lucky with a lottery ticket and read newspapers from front to back. Janie enjoyed getting the Mount Ayr Record-News for several years and probably knew more about the locals than her son, Bill! She was devoted to her Frederick heritage and cared for the “boys.”
Janie was involved with the Mechanicsville United Methodist Church as a Sunday school teacher and was a Camp Fire leader. Janie was devoted to the American Legion Auxiliary Busch-Dennis Unit 309 and she made sure that each of her granddaughters was paid-up lifetime members of the Auxiliary.
On October 28, 2013, at 2:26 p.m., Janie passed away suddenly at Saint Luke’s Hospital in Cedar Rapids, Iowa with her daughters by her side. She was preceded in death by her parents; husband Grant on May 7, 1984; her brothers, Melvin, Lyle and Rhea Alan Frederick; in-laws, Glen and Rose Bailey, Teddy Albaugh and Larry Albaugh.
Those left to cherish her memory include her children, Grant H. (Jinks) Armstrong, Junior and wife Cindy of Danbury, Iowa, Mike Armstrong and wife Diane of Oviedo, Florida, Judy Strickler and husband Tom of Mechanicsville, Iowa, Bill Armstrong and wife Sandy of Mount Ayr, Iowa, Sally Worby and husband Garry of Solon, Iowa and special son, Larry Platner and wife Cynthia of Lisbon, Iowa; 16 grandchildren; 15 great-grandchildren; her sister, Jo Ann Dietz and husband Ed of Tipton, Iowa; in-laws, Ernie Albaugh and wife Nancy, Jo DeForest and husband Jim and Mary Albaugh, and nieces, nephews, other relatives and friends.
Funeral services were held Saturday, November 2, at the First United Methodist Church in Mechanicsville. Burial was in Rose Hill Cemetery.
Casket bearers were Calvin Armstrong, Rob Armstrong, Wesley Strickler, Jared Armstrong, Josh Armstrong, Paige Worby and Andy Platner.
A memorial fund has been established to the American Legion Auxiliary Busch-Dennis Unit 309.
Fry Funeral Home in Tipton, Iowa was in charge of the arrangements.