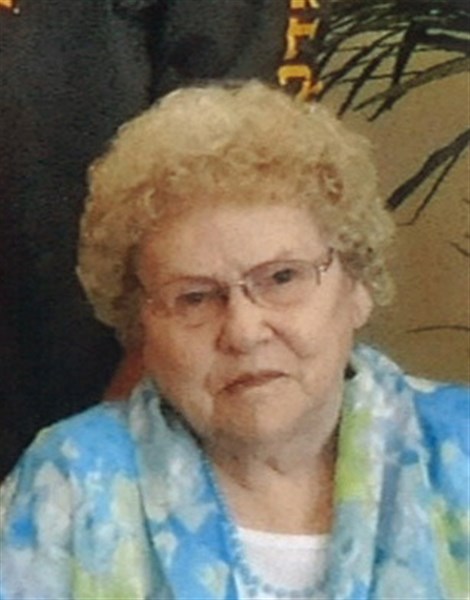 Charlotte Rice Cunning, daughter of Douglas A. and Minnie Minnick Rice, was born January 10, 1925 at Mount Ayr, Iowa. Charlotte attended country school and later was proud to graduate by GED. On March 2, 1947, Charlotte married Dwight D. Cunning in Lenox, Iowa. Charlotte and Dwight settled on a farm south of Mount Ayr where their son, Bradford Mark, was born on November 30, 1948. A daughter, Sherri Lynne, was born nine years later.
Charlotte was a farm wife and mother. She was involved in the day-to-day operations of farming in addition to caring for the household. Charlotte was a wonderful cook and anyone who worked on the farm was fed well. Charlotte and Dwight enjoyed traveling and they took trips each summer, usually to national parks, to visit Dwight’s brother, Duane, who was a park ranger. Charlotte enjoyed visiting with the neighbors and they gathered together for card games. In 1987 Charlotte and Dwight retired into Mount Ayr.
Charlotte loved her grandchildren and would follow all of their sporting and band activities. She was proud of their accomplishments. Jessica’s children, her great-grandchildren, became her pride and joy. Charlotte and Dwight moved into Clearview Estates where they enjoyed friends and fellowship with the residents. Charlotte became a resident of Clearview Homes and enjoyed bingo, listening to the musical entertainment and visiting with people. She enjoyed visits by her grandchildren and was glad to have Mark and David spend time with her when they were back to visit. She really enjoyed their trip home this past September. Charlotte was a member of the First Christian Church in Mount Ayr.
Charlotte passed away November 16, 2013. She was preceded in death by her parents; husband, Dwight, on October 9, 2013; son, Bradford Mark Cunning; siblings, Opal (Bill) Goodale, Lewis “Mike” Rice and Paul (Sadie) Rice; in-laws, Max Brooks, Thelma (Ed) Richey, Burl (Irene) Cunning, Dortha (Ed) Grossman, Cecile (Bill) Barron and Duane (Christine) Cunning.
Survivors include her daughter, Sherri (Doug) Hymbaugh of Mount Ayr, Iowa; grandchildren, Jessica (Joe) Snethen of Webster City, Iowa and Mark Hymbaugh and David Hymbaugh, both of Kihei, Hawaii; great-grandchildren, Rori, Vince and Ellie Snethen; two sisters, Betty Brooks of Washington State and Jorene (Bill) Blevins of Springfield, Missouri, and sister-in-law, Peggy Rice of Lenox, Iowa.
A memorial fund has been established in her name.
Services were held at Watson-Armstrong Funeral Home in Mount Ayr on Wednesday, November 20, 2013. Rev. Chris Conklin officiated. Musical selection was “The Lord’s Prayer.”
Casket bearers included Joe Snethen, David Cunning, Jim Rice, Dan Cunning, Randy Cook and Jason Cook.
Burial was in the Rose Hill Cemetery in Mount Ayr.