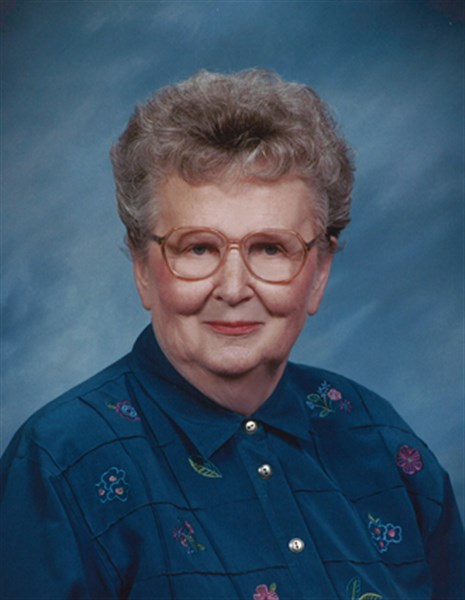 Dorothy (Bird) Main was born to Fred and Ollie (Driskell) Bird on May 2, 1923 in Filer, Idaho. The family, which included her sister, Margaret, moved back to their roots in Ringgold county, Iowa where Dorothy lived most of her entire life.  She passed away on November 15, 2013 at the age of 90.
After attending country schools, Dorothy graduated from Mount Ayr high school with the class of 1940. She attended Maryville College and also AIB, but took a job as a teacher at Fairview country school because the allure of earning money was greater, at that time, than college.
She married the love of her life, Eldon Main, on November 11, 1945, after he returned from WWII. Their decision to marry on Armistice Day (Veterans Day) was to ensure that, being a holiday, they would always get to spend their anniversary together. To this union were born Gary (Kayla) Main of Redmond, Washington, Lynda (James) Lott of Bellingham, Washington, Kelly (Terri Lee) Main of Mount Ayr, Iowa and Roger (Terri Ann) Main of Creston, Iowa. She had 12 grandchildren, Scott Main, Greg (Yen Ming Chen) Main, Matthew (Mary Ann Vellanikaran) Lott, Vanessa (Peter) Young, Jennifer (Mallory Koeppen) Lott, Kimberly (Sean) Tamman, Brett (Annika Berry) Lott, Mike (Nicole Bonebrake) Lott, Erin (Andrea) Main, Regan (Carl Jerome) Main, Quincy (Tori Braby Shields) Main and Wiley (Carrie) Main; three stepgrandchildren, Tisha (Mike) Worden, TJ (Mindy) Stalker and Todd (Cari) Stalker. She is also survived by 19 great-grandchildren, all of them gave her great joy, and her sister, Margaret Jackson of Des Moines, Iowa.
Dorothy enjoyed gardening, raising her family, being a Cub Scout den mother and being involved in the United Methodist Church where she served on many boards and was active in the United Methodist Women’s group. She worked at the Mount Ayr Public Library for a few years and then returned to work there again several years later where she continued to work even after entering Mount Ayr Health Care until her health no longer permitted her to work any longer.
She was preceded in death by her husband; parents; great-grandson, Tristan; sister-in-law, Carol Main, and brothers -in-law, Edward Main and Drexel Jackson.
Visitation will be held at Watson-Armstrong Funeral Home on Friday from 6 to 8 p.m. with funeral services held at the United Methodist Church in Mount Ayr on Saturday at 11 a.m. with Rev. Skip Rushing officiating. Burial is in the Rose Hill Cemetery. In lieu of flowers, memorials may be made to be determined later by the family.