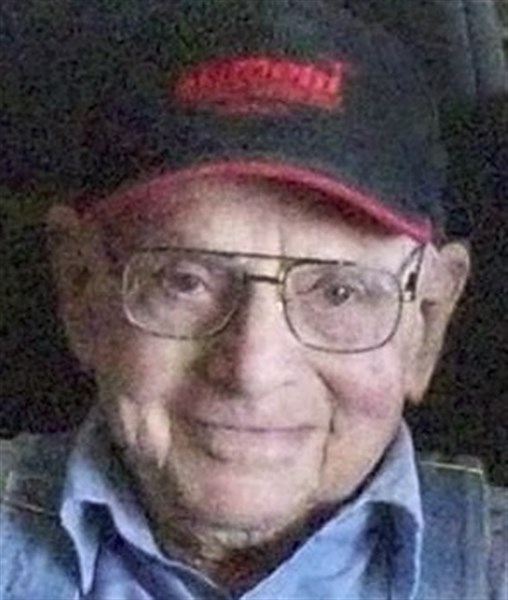 Jack Houston Hoffman, second son of W.R. “Wally” and Elva (Whisler) Hoffman was born October 21, 1923, at a rural Kellerton, Iowa farm. He passed away on November 21, 2013 at the Lamoni Nursing and Rehabilitation Center in Lamoni, Iowa.
Jack loved the farm and spent the majority of his life on the family farm. He lived in western Colorado for 10 years while working as a diamond driller in the uranium mines there but returned to Iowa and the family farm where he happily lived until moving to the Lamoni Assisted Living in October 2012.
He was preceded in death by his parents; his older brother, James; younger brother Gene, and his niece, Susan McFarland.
He is survived by two sisters-in-law, Mary Hoffman of Lenox, Iowa and Marjorie Hoffman of Lamoni, Iowa. Although Jack never had children of his own, he cherished the relationships he had with his niece, nephews, great-nieces and nephews and their families. They are niece Susan’s husband, Gary McFarland, their son, Krist and wife Sheryl and family, Stephanie and Brett, Evelyn, Thomas, Shannon, Joseph and Kimber, Jane, Kemi and Benjamin, Mac, and Jacob; their son, Mark and wife Catherine, their family, Jazer, Jethro and Kaitlin, Reagan, Charise, Brandon and Jarom, and their daughter, Rochelle and husband Duane and family, Lissa, Mikel, Sheriden, Lindsey, Keaton, Anna, Angela, Catherine, Sherae and David; nephew, Jim Hoffman and wife Pat and family, Amy, Tim and Abbey, Baylor and Kholt; nephew, Bill Hoffman and wife Sue; stepnephews, Gary Meyer and children Nick and Emily and Dennis Meyer and wife Shirley and daughter Angela, and several cousins and their families. Jack loved to visit and thus made many, many friends who also survive him.
Funeral services were held at the Slade–O’Donnell Funeral Home in Lamoni on Monday, November 25, 2013, with Pastor Royce Smith officiating. Burial was in the Maple Row Cemetery in Kellerton, Iowa.
Memorials may be given to HCI Hospice or the American Heart Association or the American Cancer Society in Jack’s memory.