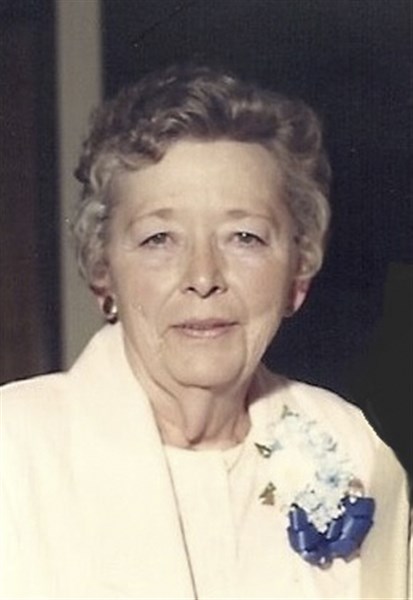 Mildred Irene Cole Beymer was born in Atchison County, Missouri, on September 16, 1922.  She passed away on December 27, 2013 at Clearview Home in Mount Ayr, where she had lived for a year. She was the  first of 10 children born to Worley and Josephine (Kellison) Cole. She graduated from high school in Hamburg,  Iowa in 1940. She worked in a drug store in Randolph, Iowa and had a war service appointment at the U.S. Navy Ammunitions Depot in Hastings, Nebraska during WWII. On April 13, 1946, she and Ronald A. “Bud” Beymer were married in Troy, Kansas. They  made their home in Orange County, California for a time and moved to Bud’s hometown of Diagonal, Iowa, where they raised four children.
Mildred’s home was always open to friends and family and she always made sure there was plenty of hot coffee and good food available. She was well-known for being a good cook  even of the wild game, fish  and anything else that Bud hunted or caught and brought home. At family gatherings the table was so full of food that there was not room there to sit and eat.  You ate wherever you could find room and even the ironing board was set up as a “table” for the younger ones. The children remember coming home from school and smelling her freshly-made rolls as they came up the street.
Many members of the extended family made their home with Bud and Mildred, for a few nights, weeks or even months. Even though the house was not large, room was always made for a few more. Sometimes they stayed in Bud and Mildred’s camper, which was parked in the yard when they were not camping. It was a special treat for the grandkids to stay in the camper, where Grandpa had hooked up a TV and Grandma had stocked the cupboards and refrigerator.
Camping was one of Mildred’s favorite activities. She and Bud were able to enjoy many camping trips, as well as their trailer on a lot at Loch Ayr. That is where Bud took countless people on boat rides and taught several area children and adults to water ski. Mildred liked being near the water, but not on it or in it, but she loved being at the lake. And there, too, anyone who stopped by was well-fed, as she spent many hours cooking there as well as at home.
After Bud retired, he and Mildred were able to spend the winter months in Arizona, where they had children and grandchildren. Mildred loved being in Arizona and enjoyed exploring Phoenix and the surrounding areas. No matter where they traveled in life, she read about the area and was eager to learn what she could and share that knowledge with her family.  She loved learning, reading, crossword puzzles and word games and was a big fan of shows like “Jeopardy” and “Wheel of Fortune.”  She nurtured her children’s learning and fostered their love of music and thirst for knowledge. She was a life-long learner.
Mildred was the kind of grandma every child should have. She encouraged them, praised them, loved them and spoiled them just enough. No matter how many grandchildren or great-grandchildren were present at any given time, each one got exactly what he or she wanted to eat. She did a lot of baby-sitting for her own grandchildren and others and treated many people like she would family members. Those who joined the family by marriage were welcomed into the fold.
Mildred was preceded in death by her husband; her parents; infant daughter, Julie Kay; sisters and brothers-in-law, Dolores (Rene  “Andy”) Kuonen, Norma (Bob) Howland and Nadine (John) Schinagel and sister Shirley Cole; brothers, Buddy Cole, Worley Jr. “Bus” (Peggy) Cole and  Ron (Pat) Cole; sisters-in-law, Maxine (Velmer) Stephens and Pauline Norris; son-in-law, Ron Smith, and granddaughter, Lori Hower.
Survivors include her children, Ann Smith of Diagonal, Iowa, Ron (Kathy) Beymer of Cincinnati, Ohio, Nancy (Steve) Roe of Mount Ayr, Iowa and Rick (Marcia) Beymer of Oxnard, California; grandchildren, Bob Hower of Creston, Iowa, Jim (Lori Beth) Norris of Diagonal, Iowa, Melanie Corkish of Kalispell, Montana, Courtney (Jeff) Damon of Brentwood, Tennessee, Andee (John) Schneider of New York, New York, Cody (Purvi) Roe of Scottsdale, Arizona, Brittany (John) Gaddum of Wilmington, North Carolina, Ryan (Liz) Roe of Mesa, Arizona, Carrie (Jason) Liakos of Phoenix, Arizona, Jessie (Colin) Heisey of Tucson, Arizona and Rory Beymer of Gilbert, Arizona; 18 great-grandchildren and another due in April; sisters, Karen Snedeker of Diagonal, Iowa and Jacky Davenport of Winterset, Iowa, and many other relatives and friends.
Services were conducted at Watson-Armstrong Funeral Home in Mount Ayr on Tuesday, December 31, 2013, with Pastor Bill Armstrong officiating. Musical selection was “Back in Baby’s Arms.”
Casket bearers included Mildred’s grandchildren.
Burial was in the Diagonal Cemetery in Diagonal.
A memorial fund was established to the United Church of Diagonal Building Fund.