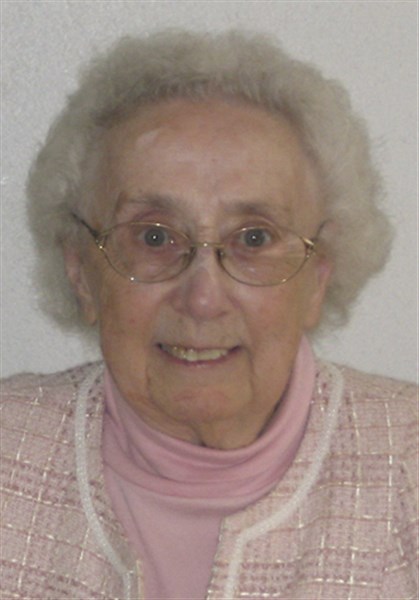 Naomi Lorene (Weeda) Wilson was born March 3, 1923 to Lawrence and Florence (Overholtzer) Weeda on the family farm between Tingley and Mount Ayr, Iowa. Naomi was the fourth of five children born into this Weeda family, Dayle, Eleanor, Doris, Naomi and Doyle. Naomi grew up working on the farm, helping with livestock, gardening and household needs.
Naomi graduated from high school in 1940 and attended teachers’ college in Marysville, Missouri. She returned home to help her parents, along with teaching grades first through eighth for 13 1/2 years in a one-room schoolhouse.
On June 24, 1955, Naomi married Lawrence and lived in Des Moines in one of the many homes he built. On August 25, 1959, they welcomed a daughter, Kristy Sue, into their home. From 1965 to 1975, they opened their home and their hearts to foster children.
Naomi worked as a home health aide for over 30 years, caring for the elderly, shut-ins and the disabled. Naomi taught Sunday school and Caravans for many years at Eastside where she was active until her death. She took care of “her” babies in the nursery every Sunday morning for over 50 years.
Naomi enjoyed making quilt tops for My Brother’s Keepers organization to provide quilts for those in need. She also enjoyed her flowers, plants and birds.  In 2007 Naomi was the recipient of the State of Iowa’s Character Counts Award for Citizenship.
Naomi is survived by her daughter, Kristy Sue (Steve) Young; two stepdaughters, Marilyn (Gale) Perkins and Gladys Ann (Don) Obedier; two grandsons, Kaleb and Kevin Young; one great-granddaughter, Kameryn Nicole “Kami” Young; six step-grandchildren, Dita, Laurie Ann, Alan, Gary, Susie and Kevin; 15 stepgreat-grandchildren; three stepgreat-great-grandchildren, and many nieces and nephews. Family was very important to Naomi.
Hamilton’s Funeral Home handled the arrangements. Funeral services were Friday, January 3 at Eastside Church of the Nazarene. Burial followed the funeral at Tingley Cemetery in Tingley, Iowa.
Naomi requests memorials be made to Eastside Church of the Nazarene or Taking It To The Streets, Ministry to Homeless, PO Box 404, Greenwood, MO 64034.
Condolences may be expressed at www.HamiltonsFuneralHome.com.