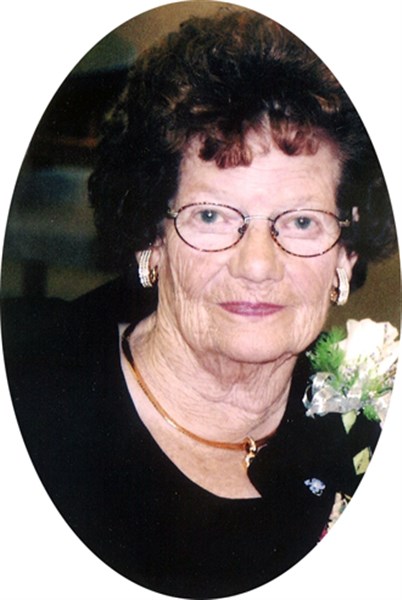 Jodene Laverne Schuster was born July 29, 1926 in Athelstan, Iowa to Honey and Ralph Schuster. She departed this life on January 19, 2014 at the Creston Hospice House at the age of 87.
Memorial services were held on January 23, 2014 at the United Methodist Church in Clearfield, Iowa with Rev. Shurmaine McAlpine officiating. Pallbearers were Brooks Brown, Ben Rikkels, Steve Maltzahn, Eric Snyder, Danny Nelson, Alex Tamerius and Mike Tamerius. Memorials will be determined at a later date. Watson-Armstrong Funeral Home of Clearfield was in charge of the arrangements. Online condolences may be left at watsonarmstrongfh.com
Jodene attended school in Blockton and Maloy. She graduated from Maloy with the class of 1942.
On May 10, 1946 she was united in marriage to Elton Bruce Brown. They moved to Clearfield where all three of their children were born, Marilyn, Carolyn and Jerry. In 1960 they purchased their present-day farm two miles north of Clearfield.
What Jodene loved most about life was her family! It always brought a smile to her face to watch her kids, grandkids and great-grandkids in their many activities, such as sports, music and dancing. Jodene also spent many hours cooking, doing crafts, gardening, traveling, shopping, bird watching and even country dancing until she was 80 years old. Together Jodene and Elton enjoyed many years at the Iowa State Fair camping with the Clearfield Lions and spending their winters in Las Vegas.
Left to cherish her memory are her daughter, Marilyn Maltzahn and husband Steve of Creston, Iowa, their daughter Traci Tamerius and husband Mike and children Jessica of Greenfield, Iowa and Alex of Creston, Iowa; daughter Carolyn Nelson of Clearfield, her good friend Steve, her daughter Dana Snyder and husband Eric and their children Megan and Kyle of Grimes, Iowa and her son Danny Nelson and wife Shannon and their children Ethan and Xander of Ankeny, Iowa, and son Jerry Brown and wife Sheila of Clearfield and their son Brooks Brown of Clearfield, Iowa and his good friend Tori and their daughter Amber Rikkels and husband Ben and their children Quentin and Kenzi of Ankeny, Iowa.
Jodene also leaves a brother-in-law, Laverne Brown; sisters-in-law, Annabell Brown and Bernice Brown; a dear family cousin, Bobbie Rood of Vancouver, Washington, and a host of nieces, nephews, and cousins.
Jodene was preceded in death by her husband, Elton, in 1999; her parents, Honey and Ralph Schuster; Elton’s parents, Allie and Hazel Brown; brothers-in-laws, Kenneth, Rex, Joe and Dolan, and sisters-in-law, Maona, Mildred and Virginia.
Jodene was a very kind and considerate person, always thinking of others first. She will be missed by all who knew and loved her. She is free. Peace has come at last.