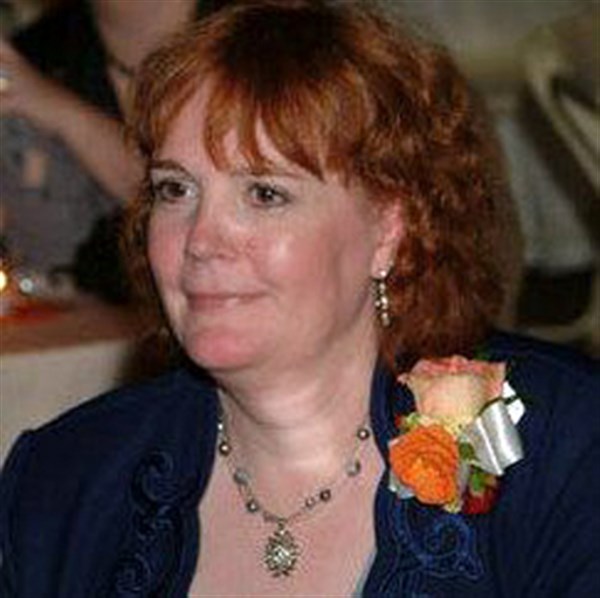 Janine Marie Burright, third and youngest daughter of Kenneth Wayne and Lola Marie Danish Burright, was born August 1, 1960 at the Ringgold County Hospital in Mount Ayr, Iowa. She was baptized and accepted Jesus Christ as her Lord and Savior in the First Christian Church in Mount Ayr in 1972 and her membership has remained there. Janine attended Mount Ayr Community school and graduated with the class of 1978. She continued her education at Southwestern Community College in Creston, Iowa.
On January 8, 1979, Brien Wayne Johnson, Janine’s only son, was born. Janine married Frank Johnson of Hoskins, Nebraska at the First Christian Church in Mount Ayr, Iowa. They lived in Hoskins until moving to Kearney, Missouri when Brien was a toddler. They later divorced. She later moved to Liberty, Missouri and reunited with her high school crush, Randy Lee King, a senior when she was a freshman.
On July 18, 1987, they were married at the First Christian Church in Mount Ayr, Iowa. They followed employment to Merriam, Kansas and since 2000 have resided in Shawnee, Kansas. Janine’s last employment was with Skillpath Seminars, owned by Graceland University. Janine worked as a sales operations coordinator, maintaining a sales contact database.
Janine loved all types of crafts, including working with plastic canvas, macramé, stenciling, cross stitch, crochet, modeling with polymer clay, scrapbooking and card and stationery making. She was so creative and talented that family and friends requested special projects made by her. Many happy hours were spent with their cats, Jimmy, Punkie, Fuzz, Shadow and Cinder. She and Randy also rescued several Japanese Chin dogs, Yoshi and Kenji from Wayside Waifs in Grandview, Missouri and Kaiko and Chicchai from smaller rescue organizations. She enjoyed competitions and was awarded first place in a recipe contest and won tickets to numerous events from listening to radio station KUDL in Kansas City, Missouri. Janine contributed to the Burright Family Cookbook and enjoyed keeping up with family and friends on Facebook.
Janine doted on her grandsons, Braydon and Kellen, and enjoyed spending time watching them play and videotaping their events.
Janine passed away Thursday, January 23, 2014, in the Kansas City, Missouri Hospice House following a battle with cancer. She was preceded in death by her parents, Kenneth and Lola Burright.
Left to cherish her memory are her husband, Randy King, of Shawnee, Kansas; son and daughter-in-law, Brien and Brandy Johnson and sons Braydon and Kellen of Overland Park, Kansas; sister, Kathy and husband Pastor Ed Shields of Mount Ayr, Iowa; sister, Kerry and husband Steve Hittner of Omaha, Nebraska; nieces, Erika Wilmes and Cole of Mount Ayr, Iowa, Emily Shelley and husband Richard, Kiersten and Kegan of Indianola, Iowa, Jourdan and Edson Ledonde, Micah and Aaliyah of Omaha, Nebraska, Luke and Ashley Hittner, Blake and Trevor of Elizabeth City, North Carolina and Will Hittner and fiancé Melissa Johnson of Sioux Falls, South Dakota,  and other relatives and friends.
Janine will be greatly missed by those who knew and loved her.
A Celebration of Life service will be held at the First Christian Church (Disciples of Christ) in Mount Ayr on Saturday, February 1, 2014, at 11 a.m. Presiding at the service will be Reverend Chris Conklin and Pastor Ed Shields. A social time and luncheon will immediately follow the service. Memorial contributions have been designated for the Wayside Waifs Rescue Group in Grandview, Missouri.