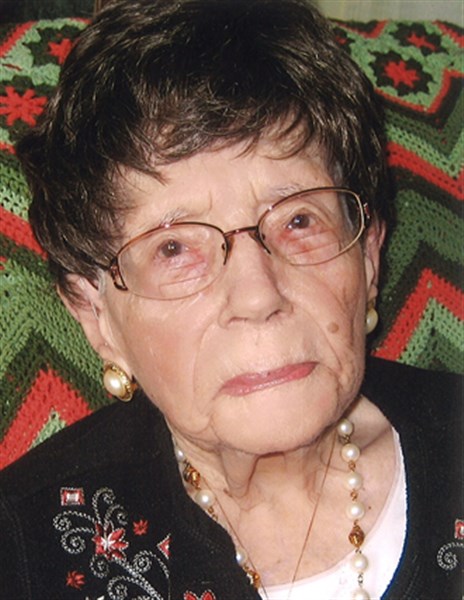 Lorabel Taylor passed away February 1, 2014 at Clearview Care Center in Clearfield, Iowa at the age of 102.
She was born January 5, 1912 in Benton, Iowa to Guy and Julia Denhart Cornelison. She graduated from Diagonal high school in 1929. Lorabel moved to Maryville, Missouri with her parents in 1933. She was united in marriage to Clifford Sylvester Taylor on January 24, 1935 in Maryville, Missouri.
Lorabel and Clifford enjoyed many good years on the farm which has been in the Taylor family for over 100 years. The farm is located west of Diagonal. They were married for 54 years before Clifford passed away in 1988.
Her faith was very important to her. She was proud to be one of the first female deacons in the Presbyterian Church and later became a member of the United Church of Diagonal where she was active in the quilting club, choir and playing the organ. In her younger years she played the piano for the silent movie theater in Diagonal. She had many talents which she gladly shared with family and friends. Her favorites included quilting, sewing, baking, gardening and playing the organ. She especially enjoyed keeping in contact with old friends through round robin letters.
Her family was her biggest source of pride and joy. She treasured any time spent with them. Whether close by or separated by miles she enjoyed hearing of the many activities of her children and grandchildren.
Lorabel found great joy watching the flower gardens bloom and watching the variety of birds that came around the house. One of her frequent quotes was “Isn’t Nature wonderful!”
Her family is grateful for her perfect love, strength of character, enduring spirit and endless inspiration. They were blessed because she loved them.
She was preceded in death by her parents, Guy and Julia Cornelison; husband, Clifford; daughter, Deanna Warin; grandson, James Warin; brother, Dan Cornelison, and sister-in-law, Mary Alice Cornelison.
Lorabel is survived by her son, Jack (Dixie) Taylor of Diagonal, Iowa and their children, Darla (Gary) Sobotka, Karen (Shon) Berry, Jim (Lisa) Taylor and Patty (Chris) Eaton; her daughter, Janelle (Larry) Dalbey of Tucson, Arizona and their children, Mitch (Masayo) of Torrance, California, Jon (Janine) of Phoenix, Arizona and Jeff of Tucson, Arizona; her son, Gary (Jean) Taylor of Springfield, Illinois and their children, Steve (Corie) Taylor of Columbia, Missouri and Shannon (JK) Olson of Cedar Rapids, Iowa; her daughter, Sharla (Owen) McCarron of Cedar Rapids, Iowa and their children, Sean of West Hollywood, California, Kyle of Seattle, Washington and Owen Taylor of Cedar Rapids, Iowa; her son-in-law, Mike (Grace) Warin of Mount Ayr, Iowa and Mike (Michelle) Warin of Pella, Iowa and Joe (Donna) Warin of Clearfield, Iowa. Lorabel was blessed with 15 grandchildren; 31 great-grandchildren; two great-great-grandchildren, and a host of nieces and nephews.
Services were held at the Watson-Armstrong Funeral Home in Mount Ayr on Thursday, February 6, 2014, with Pastor Ed Shields officiating. Musicians were Judy Newton and John Allen.
Casket bearers included Mitch Dalbey, Jim Taylor, Joe Warin, Mike Warin, Steven Taylor and Owen McCarron.
Honorary pallbearers were Lorabel’s grandchildren and great-grandchildren.
Burial was in the Diagonal Cemetery in Diagonal.