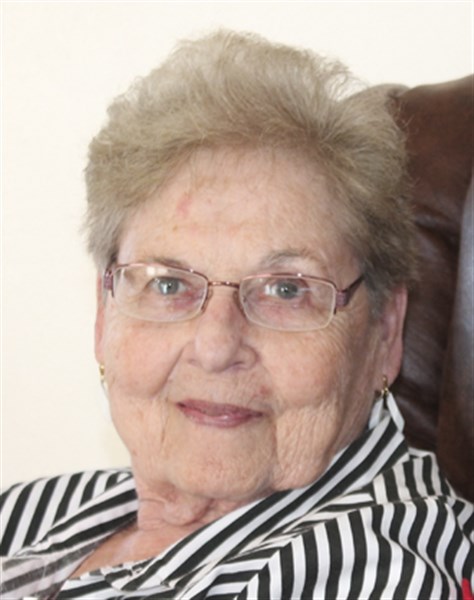 Rena Rae Smith, daughter of Hugh Ord and Louise Miriam Walters, was born February 16, 1930, near Ellston, Iowa, and passed away February 9, 2014, at the age of 83 years, 11 months and 9 days.
On August 12, 1950, she was married to Billie Jean Smith at the Methodist Church in Tingley, Iowa. A daughter, Terry Jean and a son, Teddy Hugh, were born to this union.
Though Rena had several jobs over the years, her primary and favorites were being a loving wife and stay-at-home mom – someone had to keep all those uniforms and referee shirts clean!  Many late suppers, after the games were over, were enjoyed with friends and a lifetime of memories were formed. Bill and Rena’s home was always open for a heart-to-heart conversation or an impromptu get together.
After Bill’s retirement from the fish hatchery, Rena and Bill moved to Mesa, Arizona, where she enjoyed working in the office of the mobile home park where they lived. A lot of laughter and fun was shared when she worked with fellow Iowans at the Iowa Café in Mesa.
In April of 1992 they returned home to Mount Ayr to enjoy family, friends and community.  Watching grandchildren participate in various activities was a favorite pastime and Rena usually had a cross-stitch wall hanging or baby quilt in her lap which she shared with many family members and friends. When she wasn’t stitching, Rena could be found in the kitchen making butterhorns or working alongside Bill in the family garden. Cooking with Grandma was a special treat for the great-grandchildren.
Rena was very close to her brother, Keith, and his wife, Jean, and a special “Aunt Re” to Kristy, Kelly, Kevin, Kody and Gery.  She was a long-time member of the Modern Mothers Club and enjoyed going to coffee with the girls.
Rena was preceded in death by her husband and best friend, Bill, in 2009; her parents; her brother, Wayne; her parents-in-law, Ted and Leila Smith; a nephew, Greg Walters; and a niece, Kelly Rae Liddell.
Left to cherish her memory are her daughter and son-in-law, Terry and Curt Lininger; son and daughter-in-law, Ted and Ronda Smith; grandchildren, Brandi and Tory Shay, Angie and Cassidy Shay, Renda and Travis Hartman and Casey and Melanie Smith; great-grandchildren, Addison, Adler and Adden Shay, Caden, Kinsie and Kinley Shay, Kylee Smith and Kianna Paxson; Brother, Keith (Jean) Walters; brothers-in-law, Bobbie (Teri) Smith and Donald (Linda) Smith; sister-in-law, Ann Smith; niece, Kristy Heffner; nephews, Kevin Walters, Kody Walters and Gery Walters; and many other relatives and friends.
Memorial services were held at 11 a.m. on Thursday, February 13, 2014 at Watson-Armstrong Funeral Home in Mount Ayr, Iowa. Pastor Terry Roberts officiated and musicians were Nancy Sacket, Terry Roberts and Kathy Rinehart. “I’ll Fly Away” and “Precious Memories” were the songs played. Honorary pallbearers were Larry and Karen Giles, Mark and Sue Larsen, Jerry and Karen Horton, Junior and Shirley Klejch, Harvey and Marilyn Ploeger, Bob and Lucy Ricker, Edna Small and Phil and Pat White. Interment was at the Rose Hill Cemetery in Mount Ayr, Iowa.