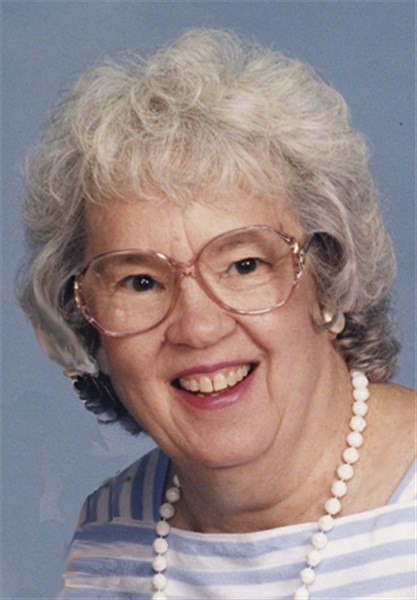 Betty Louise (Moore) Loving was born June 2, 1924 in Kansas City, Missouri, the daughter of Ross Hunter Moore and Estella Clarice (Smith) Moore. She died at the home of her daughter and son-in-law, Diane and Bob Kyser, of Independence, Missouri, on February 9, 2014 after a battle with cancer.
Betty attended elementary school at Border Star Elementary School and high school at Southwest High School in Kansas City, Missouri, graduating with the class of 1941. She then attended Graceland College, graduating with an AA degree in 1943.
At Graceland she met Paul M. Loving and the two were married on July 1, 1944, while Paul was home on leave from the Navy during World War II.
Daughter Diane was born in 1945 while Paul was still serving in the South Pacific. When Paul finished his military service, the family moved to Iowa City, where he continued his education at the University of Iowa.
The family lived in a number of communities in Iowa and Nebraska over the next few years and son Paul was born in 1948, daughter Valle in 1950, Kim in 1952, Cindy in 1954 and Joel in 1956.
After several years in Lamoni, Iowa, and a year in Boston, Massachusetts, the family settled in Overland Park, Kansas, where they lived for 36 years. Paul and Betty retired to Independence, Missouri in 1998 and Paul preceded Betty in death in 2007 after 62 years of marriage.
As well as being mother to the family’s six children, Betty worked in the school cafeteria and for 21 years served as a paraprofessional in a special education program in the Shawnee Mission school district before her retirement. She developed a cookbook and other step-by-step manuals to help students learn intricate tasks.
One of Betty’s passions was opera and she could be found many Saturday mornings listening to the Metropolitan Opera radio broadcasts, often referring to Milton Cross’s “The New Complete Stories of the Great Operas” to give details of the music. She was a wonderful cook and a welcoming hostess to many more than her own family over the years. Thanksgiving dinner with more than 30 people gathered around the table was commonplace. She was an avid reader of magazines, newspapers and books and loved to work the crossword puzzles.
She loved to follow the activities of her grandchildren and great-grandchildren and “Nana” was adopted by many of her grandchildren’s friends.
She was baptized as a member of the Reorganized Church of Jesus Christ of Latter Day Saints at the age of eight and remained a dedicated follower of Christ all her life.
Even in her final days with cancer, her wit, impish smile and ready laugh were evident.
Her legacy lives on in the lives of those she touched over the years, including her sisters-in-law, Lois Moore and Donna Moore; children and their spouses, Diane Louise and Bob Kyser, Paul Eric and Sandi Loving, Valle Jo and Alan Smith, the late Kimberly Lynn and Cathy Loving, Lucinda Gale and Charles Kincaid and Joel Mark and Kim (Deni) Loving; her 17 grandchildren and their spouses, Andrew and Emily Kyser, Troy and Julie Kyser, Eric and Teresa Loving, Jami and Brian Reece, Shane and Rachel Loving, Stefan Loving, Adison Loving, Stacy Viter, Nathan and Julie Smith, Erin and Peter Cornish, Cara Smith, Elijah and Erin Loving, Rebecca and Brett Jagger, Chris Loving and fiancé Stephanie Wangler, Kacey and Bryan Courtney, Bret and Amy Loving and Brian and Megan Loving, and 22 great-grandchildren, Jack Kyser, Colin Kyser, Madeline Loving, Brendan Loving, Natalie Loving, Aleah Reece, Rylee Reece, Jillian Reece, Alexander Loving, Isaac Loving, Hunter Loving, Elisha Cornish, Millicent Cornish, Esther Cornish, Azriel Loving, Liora Loving, Eliana Loving, Elizabeth Jagger, Ava Courtney, Allister Courtney and Brady Loving.
She was preceded in death by her parents, Ross and Estella Moore; brothers, Phillip Moore and Howard Moore; husband, Paul, and son, Kim.
A memorial service was held at Good Shepherd Community of Christ in Independence, Missouri Friday, February 14, at 10 a.m. with inurnment in a private ceremony at Mount Washington Cemetery. Memorials are to the Shawnee Mission School District Special Education program.