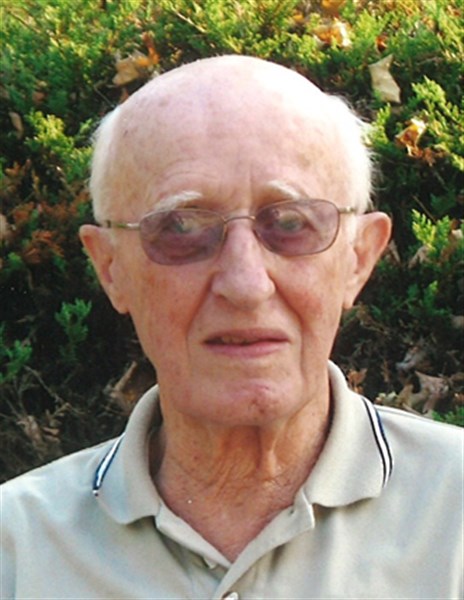 J.R. Miller was born August 6, 1920 to Ralph and Opal (Stamper) Miller. He graduated from Benton high school in 1938. He was a veteran of World War Two serving in North Africa and Italy, 3rd Convalescent Hospital, from December 1942 until December 1945. After leaving the service, he lived a short time in Des Moines, Iowa. He then moved to San Diego, California in November 1947 where he was employed by Bradston Rattan products. He was later promoted to factory foreman. In 1958 Bradston Rattan established a factory in Tampa, Florida at which time J.R. was named manufacturing engineer at that facility with a total of five employees. He retired in 1982 with a total of 50 employees, after working there for 35 years.
On February 2, 1960 he and Mildred Morse were united in marriage in Plant City, Florida where they made their home for 25 years. He and Mildred traveled extensively, including four trips overseas. Mildred spent the last five years of her life in a nursing home with Alzheimer’s, passing away on November 17, 2006. J.R. visited her every day to assist with her feeding. He was truly a loyal and loving husband.
In his spare time he took pride in raising orchids and citrus trees.
On December 16, 2006 J.R. moved to Mount Ayr to be closer to family. He soon became friends with Joan Harvey and she introduced him to dancing and other social events and they spent many happy times together enjoying these activities. Joan also got him involved in her church.
J.R. was active in assisting at the Mount Ayr Meal Site, working in the kitchen and delivering meals to homes.
He was instrumental in financing the Benton fireworks celebration and financing the restoration of the Benton jail. He also helped finance the improvement and addition to the Benton community center, as well as restoration of the playground and shelter house of the now named J.R. Miller Park.
J.R. was preceded in death by his parents and wife. Survivors include several cousins.
Services were held at Watson-Armstrong Funeral Home in Mount Ayr Thursday, February 27, 2014, with Rev. Terry Roberts officiating. Musicians were Nancy Sackett, Kathy Rinehart and Terry Roberts.
Casket bearers included Bobby Haley, Bill Stringham, Ed Rotert, Harold Crawford, Tony Butler and John Rychnovsky.
Honorary pallbearers were Bob Andrews, Bill Andrews, Jake Dailey, Wallace Sobotka, Bernard Stamper and Marvin Sobotka.
Military rites were by Ringgold Post 172 and Iowa Army Honor Guard.
Burial was in the Redding Cemetery in Redding, Iowa.
Memorials are to HCI Care Services.