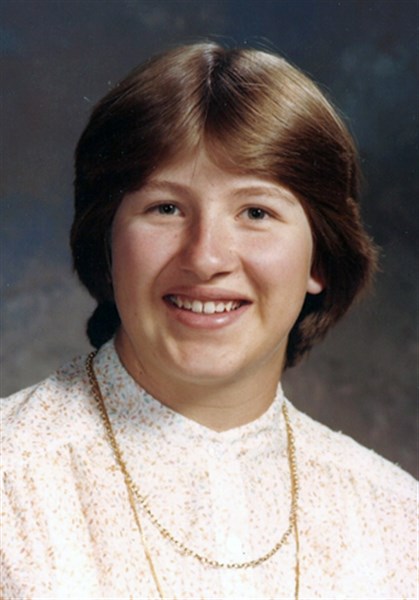 Shelley Jean Collier Bolles (Mo) was born on January 18, 1962 in Mount Ayr, Iowa to Wayne and Alberta Collier.  Shelley has three brothers, Mark, Doug and Jeff and one step-sister, Diane.
Shelley attended high school at MACHS, where she was active in basketball, softball and track. She was known for her fast pitch, lay up and shot put throw. Her exceptional pitching placed Mo into the Iowa Hall of Fame in 1981.
Shelley married David Bolles on December 27, 1985, to whom she had two sons, Austin and Colton. Her sons were everything to her. Dave and Shelley raised and bred Labrador pups. This hobby brought happiness to her life. Mo continued her love for ball by coaching Little League and grade school basketball. Her love of the game and children allowed her to be a known member of the community. Coaching baseball was one a Mo’s favorite memories.  Shelley loved playing bingo with her mom and grandma. Shelley enjoyed the company of her cousin, Margaret. She also shared a lot of laughs with her good friends, Jeanine and Deanna, and her soon to be daughter-in-law Tiffany Wimer.
Shelley had a few jobs before finding Hy-Vee, where she found many friends. She worked as the dairy manager and enjoyed seeing all the customers coming into the store.
Shelley began her battle in 2005 with a heart attack. She had the LVAD “heart pump” placed in October 2011 and was awaiting a heart transplant. Cancer became another struggle in 2013.  Shelley’s health continued to regress and she lost her long hard-fought battle on March 8, 2014.
Shelley is preceded in death by her parents, Wayne and Alberta Collier.
Survivors include husband David Bolles; sons Austin and Colton Bolles; brothers Mark (Elisa) Collier, Doug Collier and Jeff Collier; stepsister Diane Millsap; nephews Camron Collier, Nevin Collier, Bracken and Wyatt Collier and Nick and Jaxson Segebart; nieces Stacy (Russ) Segebart, Kim (AJ) Stevenson and Bentleigh Collier, and many close friends.
A memorial fund in Shelley’s name will be decided upon at a later date. Watson-Armstrong Funeral Home in Mount Ayr is in charge of the arrangements.
Services will be conducted at the First Christian Church in Mount Ayr on Friday, March 14, 2014 at 11 a.m. with Rev. Chris Conklin officiating. Eulogy will be by James Saville.
Casket bearers are Mack Greene, Kirk Golliday, Roger Walter, Richie Palmer, Nevin Collier and Camron Collier.
Honorary pallbearers will be Raymond Hensley, Steve Sickels, Mike Reynolds and Eric Walter.
Shelley will be laid at rest in the Rose Hill Cemetery in Mount Ayr.