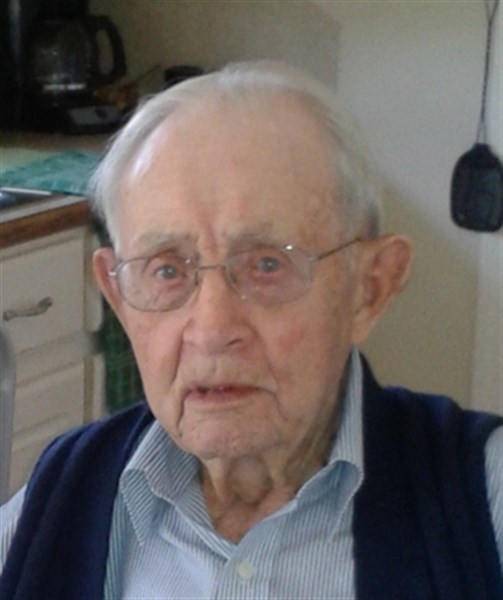 Lyle R. Nichols, 94, of Mount Ayr, Iowa passed away Monday, March 31, 2014. Lyle was born November 9, 1919 in Ringgold County, Iowa to John Thomas and Verda Morgan Nichols. He was one of four children; he had two brothers, Donald and Lyndon, and a sister, Betty. Lyle was educated in rural schools and later graduated from Mount Ayr Community high school with the class of 1938. After graduating from high school, Lyle served in the United States Army and World War II, spending 33 months in the South Pacific.
After discharge from the service, Lyle and Mildred Trimble were married on August 3, 1945. To this union two sons were born, Kurt Conrad Nichols and Christopher Creighton Nichols. Lyle started his career with Rideta Electric Cooperative of Mount Ayr in October 1945 and worked with them for 39 years, retiring on December 31, 1984.
Lyle was an industrious person, always busy in some manner. He was a good neighbor, husband, father and grandfather. Lyle was a man you could depend on. He was a member of First Baptist Church of Mount Ayr, Veterans of Foreign War Post #1797 of Creston, American Legion Post #172 of Mount Ayr, Faith Lodge A&M #179 of Mount Ayr, 32nd degree of Scottish Rite of Free Masonry of Valley of Des Moines Consistory and member of Mount Ayr Volunteer Fire Department.
In addition to his parents, he was preceded in death by his wife, his brothers and sisters-in-law and his sister and brother-in-law.
Survivors are his sons, Kurt and wife Lesa and their daughters, Brooke and Bailey, and Christopher and wife Karen and their children, Adam and Lindsey; several nieces and nephews, and many friends.
Services were conducted at Watson-Armstrong Funeral Home in Mount Ayr on Friday, April 4, 2014 with Pastor Bill Armstrong officiating. Musical selection was “Just A Closer Walk With Thee.”
Military rites were by Ringgold Post #172 and Iowa Honor Guard Unit.
Burial was in the Rose Hill Cemetery in Mount Ayr.