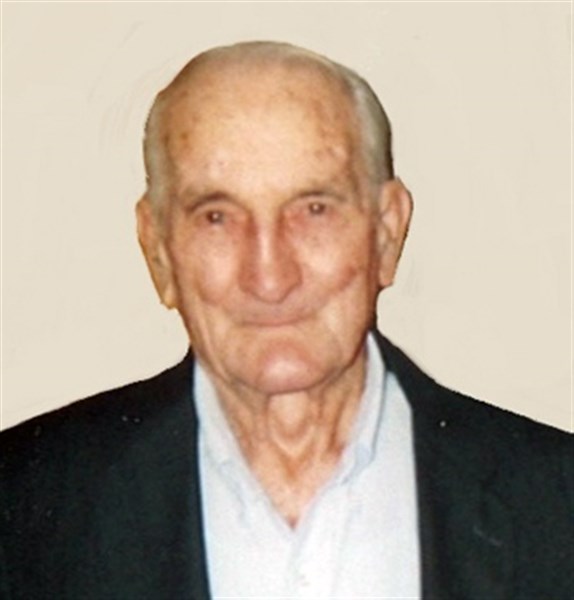 Homer Eldon Rinehart, 97, of Mount Ayr, passed away at the Mount Ayr Health Care Center under the care of HCI Hospice Care Services on April 9, 2014. He was also known as “Homer Ben” or “Ben” for many years.         Homer was born on March 1, 1917 to Ira Rinehart and Pearl (Montgomery) Rinehart near Allendale in Worth County, Missouri. He attended the Butler rural school.
In 1941 Homer was united in marriage with Lela Smith. They purchased a farm south of Mount Ayr in 1942. Homer operated this farm up until the time that he passed away. Homer was an early adopter in southern Iowa of soil conservation farming methods. Homer and Lela had three children, Larry Rinehart of Ankeny, Iowa, Terry Rinehart of West Des Moines, Iowa and Mark Rinehart of Amarillo, Texas. Homer and Lela were happy to celebrate their 70th wedding anniversary in 2011. He was an active member of the Community of Christ church located in Mount Ayr, Iowa.
Homer was a lifelong avid domino player and in the later years loved to play dominos almost every day with his many friends at the Worth County Senior Center in Grant City, Missouri. He was best known for being able to execute triple plays in dominos. He also was a regular customer of the Oldtowne Café in Allendale, Missouri and really enjoyed visiting with his friends there. Homer was always a positive person and preferred to look on the bright side of things.
Homer is survived by his three sons and two daughters-in-law, Larry and wife Laura, Terry and Mark and wife Laura; three grandchildren, Brandon, Ashley and Katarina, and five great-granddaughters, Emily, Elizabeth, Taylor, Lauren and Kristen, and many nephews and nieces.
Homer was preceded in death by his parents; wife, Lela; grandson, Nicholas; brothers, Vern, Orval “Bob,” Clyde, Lloyd “Pat,” Claude, Leland “Red” and Calvin; and his sisters, Myrtle Tschudin, Velma James, Dorcie Rinehart and Anna Jeannette Miller.
Memorial contributions may be directed to the Worth County Senior Center in Grant City, Missouri.