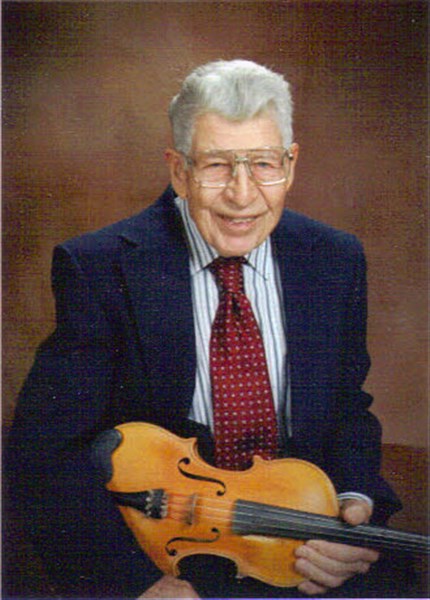 John Warren Knapp was born February 10, 1925 to Everett Knapp and Jessie Galloway Knapp on a farm west of Centerville, Iowa. As a young boy he attended a one-room schoolhouse through the eighth grade and then attended high school in Centerville graduating in 1943. In February 1944 he enlisted in the navy and served as a signalman second class on the USS Briscoe in the Pacific theater. He was discharged in May 1946. On June 9 he married his lifelong love, Anna Lois Wilson. They moved to Ames, Iowa where John entered Iowa State College of Agriculture and Mechanic Arts, graduating on December 17, 1949 with a bachelor of science degree in horticulture. After graduation he accepted a job in Nashua, Iowa and then moved to Alvo, Nebraska where he was in charge of an apple orchard, a 1,000 laying hen house and other farm chores. While in Nebraska they adopted their son, Larry P. Knapp. In 1956 they moved to Farragut, Iowa and he worked for Henry Field Seed & Nursery in Shenandoah, eventually becoming the vice president in charge of nursery production. In 1958 they adopted their daughter, Martha Ann Knapp.
In 1976 John and Anna started their own business, Knapp Time Nursery. They shifted to greenhouse production and when they sold the business, they had 12 large greenhouses.
In 1998 they moved to Lamoni, Iowa where they bought a pasture farm. John moved his Angus herd to the farm. They also continued growing and selling peonies. Their grandson, Anthony Knapp, was born in 1990 and spent time with them, living with them full-time for five years.
John‘s interests were limitless and the last few years he devoted the majority of his time dancing and playing his beloved fiddle.
John and Anna attended church every Sunday. They moved their membership to the local Methodist church each time they moved.
Surviving are daughter Martha Knapp and friend Mark Smith of Colfax, Iowa, grandson Anthony Knapp of Des Moines, Iowa and nephew Duane Knapp and wife Gail of Kidder, Missouri.
He was preceded in death by his wife, Anna; his son, Larry, and his brother, Earnest.
Visitation will begin at 12:30 p.m. Friday, May 2, 2014, at the Lamoni United Methodist Church with a memorial service to follow at 1:30 p.m.
In lieu of flowers, the family requests that memorial donations be made to the Lamoni United Methodist Church. Online condolences may be left at www.iowacremation.com.