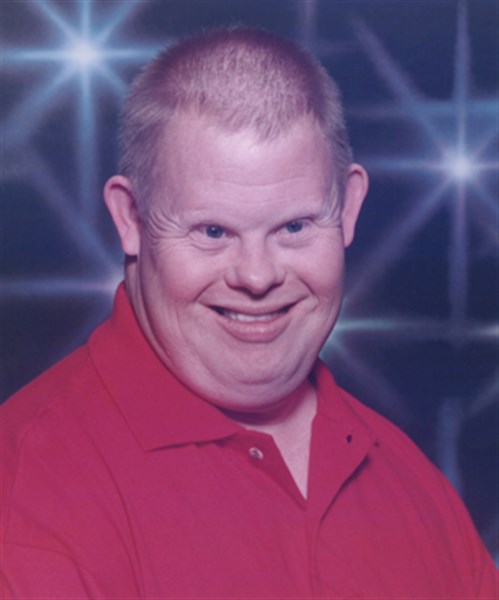 Joseph “Joe” Paul Haley was born June 4, 1957 to Harry Howard Haley and Ruth Annella Roudybush in Creston, Iowa. Joe was raised in rural Diagonal and lived in Afton for a short while. He currently resided at the Ringgold County Group Home in Mount Ayr. Joe was active in the Special Olympics once serving as torch bearer at Drake, RCSS Bowling League, attending church and other community activities.
Joe’s childhood was spent growing up on the farm and doing everything his brothers and sisters did. He was a good worker and carried wood, did chores, picked up rocks, helped with the garden and livestock.
He met his first childhood friends (Alan, Joan, LuAnn, Barbara, Shirley and Mary C.) in a young children’s special education class taught by Velda Routh and Becky Caldwell at the Mount Ayr Christian Church.
After they were older, they went to school in Mount Ayr. A few yeas later, riding the big yellow school bus to Diagonal was an awesome experience and then going on to Creston to Jefferson Developmental.
Returning to Diagonal and hanging out with his brother’s friends was especially neat with some of the best times included going to the Main Street and driving a car with some of the Diagonal High School students.
Joe’s friends were important to him. He never met a stranger and helped many people better understand and accept challenged individuals. His involvement in the Ringgold County Supportive Services program allowed him to have many friends, do Special Olympics, act in plays, provide games at the Ringgold County Fair, attend Iowa State Fair and go on trips. He had special names for everyone and his speech challenges did not get in the way of many good conversations.
Joe’s involvement in family activities included him saying the mealtime prayer and helping in anyway he could. He especially enjoyed holding the babies. He liked going to Diddyville, Iowa State/Iowa game campouts, graduation parties and anything the family was doing. Christmas was also another special get together for the family. The Haley family has ninety-seven members so Joe always had someone to visit with, show his “notes” to or enjoy.
Joe passed away May 11, 2014 at his beloved Ringgold County Group Home with Hospice making it possible to stay with his friends and in the surroundings he was comfortable with. His special smile, funny faces, love of “7” (Mt. Dew), WWF wrestling, the Dukes of Hazard, Walker Texas Ranger, the Fonz, hours of typing on the typewriter or computer, eating pizza and ice cream are a few of the many memories that will be cherished.
Left to cherish Joe’s memory are five brothers, Jerry (Janet) Haley, Jim (Shirley) Haley, Jeffery (Janet) Haley, J.B. (Roben) Haley and Jack (Tina) Haley; six sisters, Janet (Lynn) Kesterson, Judy (Raymond) Hensley, Joyce King, Janice (Vince) Gaeta, Jean Moffitt and Janelle (Duane) Schafer; many nieces and nephews; his Group Home Family: Sharon Lesan, Joan Routh, Linda Jackson, Joan Bickel, Ralph Hampton, Alan Force, Danny Reynolds and staff. He was preceded in death by his parents; brothers in-law, Ted Moffitt and Ronnie King; nephew, Greg Haley.
Services were conducted by Watson-Armstrong Funeral Home on Thursday, May 15, 2014 at 10:30 a.m. with Pastor Ed Shields officiating.
Muscians were Nancy Sackett, Mary Davenport and Margaret Bickers.
Casketbearers were Jerry Haley, Jim Haley, Jeffrey Haley, J.B. Haley and Jack Haley.
Honorary casketbearers are the group home family.
Burial was in the Marshalltown Cemetary in rural Benton.
There is a memorial fund set up for the Ringgold County Group Home or Marshalltown Cemetery.