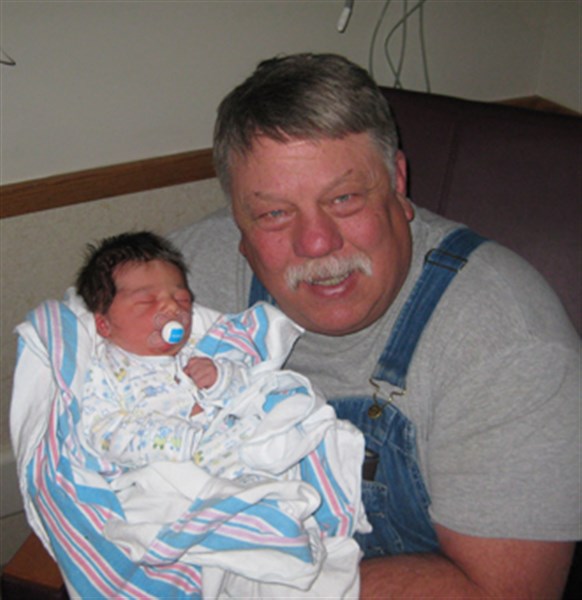 Patrick Gene Potts, 57, of Diagonal, Iowa, formerly of Des Moines, passed away May 5, 2014 at his home.
Pat, son of Doris Jean (Creveling) and Robert LeRoy Potts, Sr, was born December 19, 1956 at Iowa Methodist Hospital in Des Moines, Iowa. Pat grew up in Des Moines and was All City Football at Des Moines Lincoln. He graduated from Lincoln in 1975.            Pat worked for Meredith Publishing for a while before beginning a 30 year career with the phone company as a cable splicer; retiring from Century Link. In the late 1990’s, Pat branched out to farming and in 1998, he purchased a farm northeast of Diagonal, Iowa and moved there in 2003.
Pat married Bonnie Kelce and to this marriage were born two children; Melissa & Patrick.
Pat loved to fish and enjoyed hunting and farming. He was a lifetime member of the Communication Workers of America Union and enjoyed visiting with his friends at Boyer’s Bar in Diagonal. His pets were important to him and he loved spending time with his children and grandchildren.
Survivors include his children Melissa (Ali) Daoud of Santa Clara, CA and Patrick (Lane) Potts of Ames, IA; grandchildren Aaliyyah, Asmaa, Ahmed, Landon, Braylon, and Kaygan; mother Doris Potts of Des Moines, IA; brothers Robert (Diane) Potts, Jr of Des Moines, IA and Mike (Deb) Potts of Leon, IA; nieces, nephews, other relatives and friends.
He was preceded in death by his dad, Robert Potts, Sr, in 2001. A memorial fund will be established for the Diagonal High School FFA.
Services were Thurday, May 8, 2014 with Pastor Bill Armstrong officiating. Watson-Armstrong Funeral Home was in charge of the arrangements.
Songs were “A Country Boy Can Survive”, “I’m Going to Miss Her” and “Drink a Beer”.
Casketbearers were Colton O’Conner, Charlie Fletcher, Jack Farrell, John DuBois, Charlie Gillum, Jim Routh, Ben Allen and Randy Etheridge.
Honorary Pallbearers were Dave Ballard and Jimmy Grant.
Burial was at the Union Cemetery in Diagonal, Iowa.