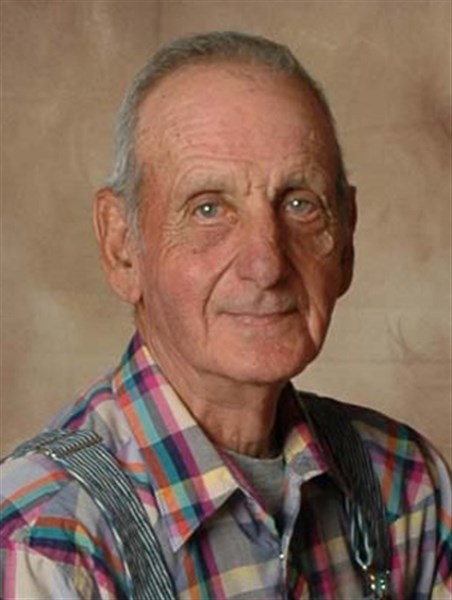 Lyle Leo Hull, 76, died Sunday, May 18, 2014 at Clearview Home. On May 22, 2014, at 3 p.m., a beautiful graveside service was performed at the Tingley Cemetery where he was laid to rest. Following the service, family and friends gathered at the Tingley Community Building to celebrate Lyle’s life and shared personal memories of him.
Walter Eugene and Mary Louisa (Perry) Hull were blessed with twin boys, Lyle and Larry, on June 19, 1937, near Afton, Iowa. These boys joined their two brothers and three sisters who were at home.
On January 23, 1958, Lyle and Arnolene Graham traveled from Murray, Iowa to Clarke, Missouri in 13 inches of snow to wed at the home of Arnolene’s sister, Ruby. To this union one son and two daughters were born: Dick, Kim and Connie.
Lyle worked for the City of Osceola; Miracle Manufacturing; for area farmers including Bill Wimer (Grant City) and Ralph Brammer (Delphos); and A & Z Manufacturing. Out of all the jobs that he worked, Lyle was most remembered mowing or raking hay on a John Deere tractor.
Lyle had a great personality and didn’t know a stranger. He loved his family.
He and Arnolene enjoyed dancing and spending time together. He loved to hunt coon with Billy Joe and Dick, play horseshoes at the Hull Reunion and spend time fishing and watching baseball games with his grandchildren and great-grandchildren.
Lyle became a resident of Clearview Homes in August of 2013. He had a great sense of humor and would often tease “the girls”, especially “Pinky”. He really enjoyed the pictures of their kids that they would share.
Lyle was preceded in death by his parents; daughter, Connie Hubbard and her husband Lloyd (Dinky) Hubbard; grandson Steven Hubbard; siblings Bernard Hull, Bernadine (Hull) Harpin, Et Hull, Noma (Hull) Byrd and Verladine (Hull) Main.
Those left to cherish his memory include his wife Arnolene Hull of Mount Ayr; children David Sorter of Auburn, Washington; Dick (Marsha) Hull of Mount Ayr, and Kim (Jeff) Nieman of Mount Ayr; grandchildren Matt Hubbard, Jacob Hubbard, Raece Nieman, Joe Hull, Michelle (Hull) Long, and Ashley (Hull) Vanderflught; eight great-grandchildren; his twin brother Larry Hull of Mount Ayr; sister-in-law Margaret Hull of Tingley; brother-in-law Ed Main of Des Moines; nieces, nephews, other relatives and friends.
A memorial fund has been established in his name to be decided later.