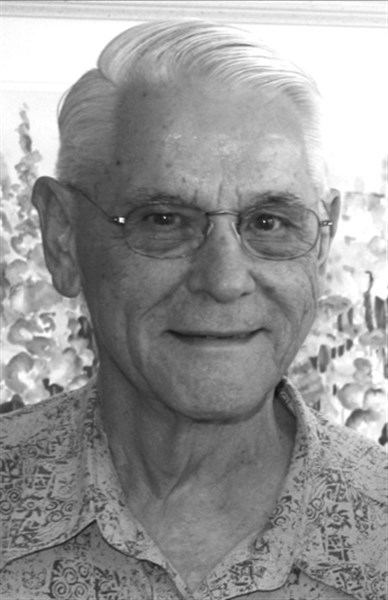 John Joseph Fell, 83, died on Saturday, June 7, 2014 surrounded by his family at Des Peres Hospital in St. Louis, MO.
He was born on January 13, 1931 in Council Bluffs, IA, one of seven children born to the late “AP” and Jenny (Byers) Fell.
John grew up in Council Bluffs, graduating in 1949 before joining the military where he served with the United States Army.
Upon his return from the military, John married the former Nancy Marron on July 29, 1961 in Omaha, NE and together the two have been blessed with 53 years of marriage and four sons.
John farmed until he and Nancy’s first son was born when he started an Insurance Agency in Council Bluffs which eventually led him to begin a career in banking in 1972 with State Bank & Trust in Modale, IA where he worked for several years before relocating to Mount Ayr, IA where he worked for the former Hawkeye State Bank.
After moving to Jerseyville in 1987, John began working at Citizens State Bank in Shipman, where he would eventually retire as Vice President in 1997.
A dedicated man, John gave much of his time to serving his family and others. He served on the School Board in various capacities, including President while in Modale, IA and was an active member of the Lions Club for many years.
John was committed to his faith, praying the rosary every day and was an active parishioner throughout his life, serving in many capacities at his parishes.
After retirement, John developed a passion for fitness and enjoyed time spent at the JCH Wellness Center.
Above all, John loved and cherished his family. He was a devoted husband to his wife, Nancy and a loving father to his four boys – rarely missing a sporting event throughout their childhood.
Surviving are his wife, Nancy Fell of Jerseyville; four sons, Jim Fell of Jerseyville; Joe (Jona) Fell of Seoul, Korea; Paul (Heather) Fell of Houston, TX; Steve Fell of Houston, TX; eight grandchildren; two sisters, Margaret Houlihan of St. Louis, MO; Sister Jane Fell of Philadelphia, PA; two brothers, Robert Fell of Omaha, NE and Leo Fell of Fortaleza, Brazil.
In addition to his parents, he was preceded in death by a brother William Fell and a sister, Alice Ann Turner.
Visitation will be Tuesday, June 10 from 4 p.m. until time of rosary service at 5 p.m. at Crawford Funeral Home in Jerseyville, IL.
Funeral Mass will be held on Wednesday, June 11 at 10 a.m. at Holy Ghost Catholic Church in Jerseyville with Father William Hembrow officiating.
Burial will be at St. Francis Xavier Cemetery in Jerseyville.
Memorials may be given to St. Francis/Holy Ghost Catholic Schools or to Masses.