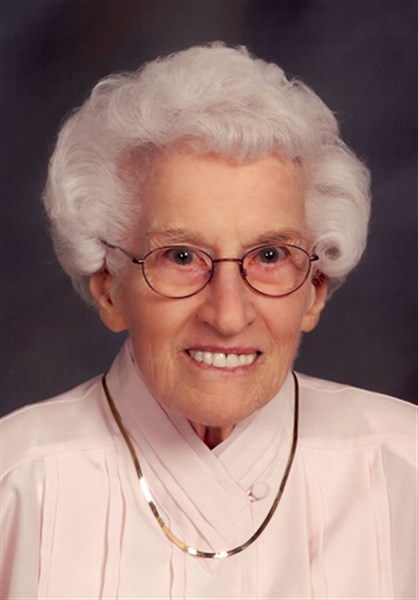 Ione Jennings Wight, 92, of Winterset, Iowa, died Monday, June 9, 2014 at the Madison County Memorial Hospital in Winterset.  Funeral services will be held 11 a.m. Tuesday, June 17, 2014, at the First United Methodist Church in Winterset with Rev. Dr. Beverlee Bell officiating.  Burial will be in the Winterset Cemetery.
Ione was born on December 21, 1921, at Ringgold County, Iowa to Clark and Mary (Young) Jennings. She was married on May 24, 1945 at Winterset, Iowa, to Ward Eugene Wight and to this union were born two sons, Douglas and Bruce.  She had been a resident of Winterset since 1943 and was a retired elementary schoolteacher having been employed by the Winterset Community Schools from 1943 to 1945 and then 1956 to 1985. Ione was a 1939 graduate of Beaconsfield Consolidated High School in Beaconsfield, then attended Northwest Missouri State in Maryville, MO and received her BS in Education from Drake University in Des Moines in 1956.  She was a member of the First United Methodist Church, United Methodist Women, Winterset Church Women United, lifetime member of the National and Iowa Education Association, Pythian Sisters, Madison County Historical Society, Child Welfare Club, and a volunteer for the Madison County Historical Museum and Madison County Chamber of Commerce.
Ione is survived by her sons, Douglas Wight of Orange, CA and Bruce (Connie) Wight of Ames; brothers, David (Wilmina) Jennings of Tingley and Norman (Marian) Jennings of Mount Ayr; grandchildren, Jennifer Brown, Emily Wight, Matthew Wight, Darren Wight, Sara Smith, and Erin Wight; and great grandchildren, Richelle Brown, Jeniya Brown, Avery Smith, and Lucy Smith.
She was preceded in death by her parents, Clark and Mary (Young) Jennings; husband, Ward E. Wight; and sister, Mary Margaret Jennings.
Visitation will be from 9 a.m. until service time on Tuesday at the First United Methodist Church.  Memorials given to the family will be directed to the First United Methodist Church, Winterset Community Educational Foundation, Madison County Historical Society, or Friends of the Winterset Public Library.
Funeral arrangements are being handled by McCalley-Collins Funeral Home in Winterset.  Online condolences may be left at www.mccalleyfuneralhome.com.