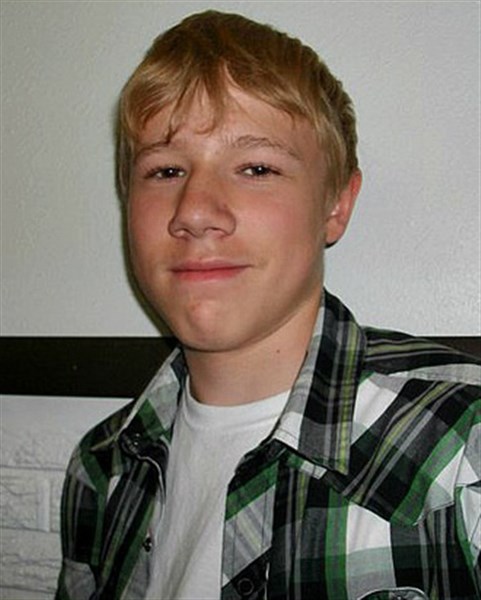 Jacob “Jake” Allen Phelps, 16, of Tabor, Iowa, was taken from us too soon on Sunday, June 29, 2014 in Greeley, Colorado while visiting family.
Jake was born August 30, 1997 in Council Bluffs, Iowa to Verlin “Gene” Phelps and Valerie Phelps. He was to be a Junior at Fremont Mills High School in Tabor, IA. He was in Track, Chorus and Drama Club and was a community volunteer in Tabor. He was a beloved son, grandson, brother, nephew, cousin, and a friend to everyone he met.
He is survived by his father and step-mother, Verlin and Stephanie Phelps of Pacific Junction, IA,; mother, Valerie Phelps of Sterling, CO.; sisters, Cassie (Josh) Thomas of Merino, CO. and Jessica (Phillip Zeski) Phelps of Hastings, IA.; brother, Jordan Brammer of Merino, CO.; nephews, Braiden, Ryder and Carsyn Thomas; grandparents Brenda and Verlin Phelps of Grand River, IA and William and Melva Stephens of Council Bluffs, IA.; aunts, Sheila Phelps of Lincoln, NE. and Tammy (Richard) Thomas of Osceola, IA.; uncles, Jeremy (Donetta) Phelps of Tingley, IA. and Nicholas (Carrie) Phelps of Lamoni, IA., 15 cousins; as well as other relatives and many, many friends.
He was preceded in death by his great-grandparents, Lucille Ward, George and Cleo Phelps, Arless and Lucille Joy; aunts, Kim Ward and Marilyn Taylor; and cousin, Jerry Phelps.
A Celebration of Life Service will be held at 11 a.m. at the Faith Fellowship Church, 230 S. Fillmore Street, Osceola, Iowa on Saturday, July 19, 2014. Memorials may be directed to his family.