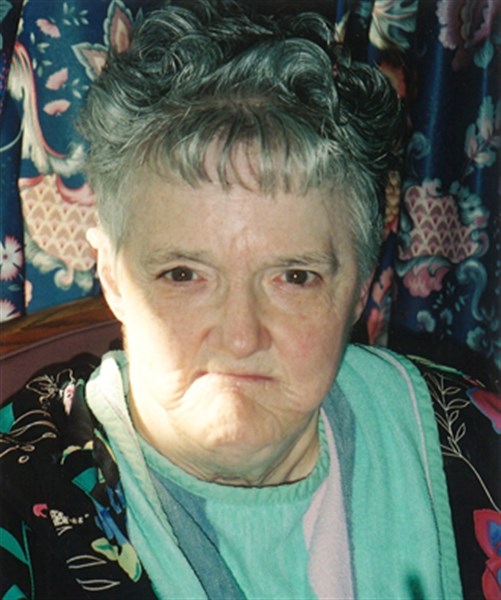 Anita Joyce  Hayworth, age 78, of Mount Ayr, who died Wednesday, July 16, 2014, at the Clearview Home in Mount Ayr, Iowa. Funeral services were held 3 p.m., Sunday, July 20, 2014 at the Watson-Armstrong Funeral Home in Mount Ayr. Reverend Terry Roberts officiated the service. Memorials may be made to the Easter Seal’s Camp Sunnyside at Des Moines or Clearview Home Employee Fund. Online condolences may be left at www.watsonarmstrongfh.com.
Anita Joyce Hayworth was born November 11, 1935, in Taylor County, Iowa, the daughter of Alph Hayworth and Mina (Winemiller) Hayworth. She grew up in Taylor and Page Counties. Anita Joyce had a normal childhood until about the age of 10 years when she became the princess of the family. After her father’s death in 1946, Anita lived with her mother in Clarinda until Mina’s death in 1974. Anita Joyce joined the Clearview Home in 1975.  She called it home for 39 years.
Anita Joyce had a number of things she looked forward to…one of them being able to attend Camp Sunnyside each year and another was family reunions and parties. Anita insisted on hugs and kisses from everyone she met or attended.
Left to cherish Anita Joyces’s memory is one sister, Rebecca Morehouse of Sarasota, Florida; her best friend and niece, Betty Miller, along with a large number of other nieces and nephews, great-nieces and nephews and great-great nieces and nephews and the many friends she met at Clearview and Camp Sunnyside over the years.
Preceding Anita Joyce in death is her father Alph Hayworth in 1946; mother, Mina Hayworth in 1974; five brothers, Edwin, Benjamin, Quentin, Kyle and Ivan Hayworth; two sisters, Elsie Thompson and Crystal Gourley as well two infant sisters.
Anita Joyce will be missed by her entire family and many friends.