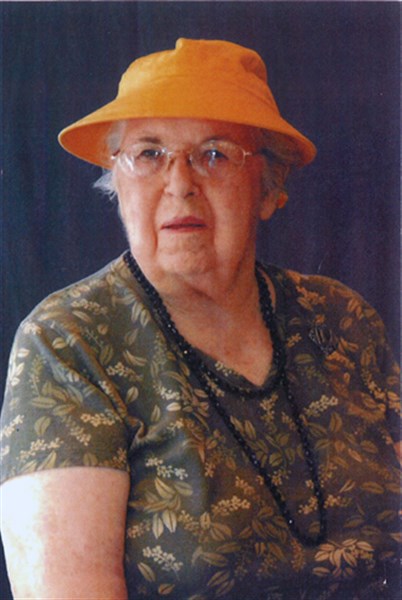 Elizabeth Caroline Butler Lynch was born in Lotts Creek Township, Ringgold County, IA, on November 11, 1922 to Murray Abraham and Clara Acenitha Jones Butler. In her early years she lived in Irena and Eagleville, MO before moving to a farm in Lotts Creek Township where she attended school at the Ringgold School house. She walked 2 ¼ miles each way to school, stopping at her Butler grandparents home, to get warm and to pick up her lunch pail that Grandma Ettie had packed for her. Her brother, Welba Dean (Buddy) Butler, joined the family when she was 8 years old. Her Grandmother Jones came to stay permanently with the family then except for 2 years when she and Elizabeth lived with Liz’s cousins Earl Jr. and Max Jones in Lamoni. When they moved back to the Butler home, Liz then finished school at Mount Ayr High School, graduating with the class of 1940.
After high school, Liz worked as an assistant to the superintendent and principal at Mount Ayr High school where she took courses in journalism, home economics and speech. She felt these classes helped her for the rest of her life. She then worked in the Triple A office from 1942 until her marriage to Robert Lee Lynch on May 7, 1944.
Liz and Bob established their home on Bob’s family home farm near Maloy, IA. They were parents to Teena Eileen, David Lee, Alan Craig and Randall Douglas. Liz encouraged her children to join activities and clubs and spent several busy years ferrying one or another of them to meetings, ballgames, church, skating rink, movies and 4-H events. Friends of her children were always welcome in their home. Bob and Liz farmed and raised cattle. Once her children were grown, she began her farm work in earnest, working in the field and with the cattle. Bob called her the best hired man he had ever had. They were both 4-H members in their youth and became leaders in the Maloy community after their marriage. Liz was a 4-H leader for 15 years and was a chaperone for girls to the Iowa State Fair several times. She and Bob went to the State Fair every year until their health failed.
Liz was also active in the First Christian Church, singing in the choir, teaching Sunday school and as a Women’s circle leader. She was the president of the Iowa Angus Auxiliary and a charter member of the Charolais Auxiliary. She loved to sew and make curtains for her home and clothing for her children and grandchildren. She loved to play cards and she and Bob belonged to a pitch club with friends for many years. One of Liz’s proudest accomplishments was writing the Maloy news for the Mount Ayr Record News which she started doing on January 8, 1965 and did for the next 45 years. She was always pleased when told by someone how much they enjoyed reading her news. Her son David was sent to Vietnam in June of 1968. On the morning he left, he hugged his mom really close and told her he would be back. That made his being away easier, but she still went to the post office every day to see if there was a letter from him.
In her later years, she cleaned houses for other people and enjoyed the associations she made with the families that she cleaned for. She called herself a domestic nngineer. She loved her family very much and was happiest helping them or having them come to visit, especially her grandchildren. They all liked to stay there and have many happy memories of their time at Grandma and Grandpa Lynch’s. Liz passed away on July 22, 2014 while a resident at Clearview Home in Mount Ayr.
She is survived by her children Teena and Ronald Gater, David and Nancy Lynch, Alan Craig and Anne Lynch, Randall and Donita Lynch; her grandchildren Eric and Susan Gater, Brian Gater, Bethany and Robert Morris, Jason and Tara Lynch, Meggan and Dave Brown, Heather and Jeff Hummel, Holly and Donnie Wasson, Robert and Amy Lynch, Lucas Lynch, Emily and Jody Nye, Valerie and Shane Christiansen; her great grandchildren John, Carissa, Miranda, Kelton, Mason, MacKenzie, Seth, Paige, Dreven, Logan, PJ, Brandon and Ayla; cousin Ione Virginia May Baal-Edwards and several nieces and nephews.
She was preceded in death by her husband Bob; her parents; parents-in law Wilbur and Donna Lynch; her brother Buddy and his wife Phyllis; her husband’s brothers and sisters and their spouses; three nephews, Ronald Lynch, Lyle Wood and Daniel Butler; niece Kay Nelson; and a great granddaughter Brianna Elizabeth Best. Watson-Armstrong Funeral Home in Mount Ayr is in charge of the arrangements. Memorial funds are the First Christian Church and the Ringgold County 4-H Foundation.
Services were held on July 26, 2014 at the First Christian Church in Mount Ayr. Officiating was Rev. Chris Conklin. Musicians were Stephanie Hosfield and John Allen. Casketbearers were Jason Lynch, Robert Lynch, Brian Gater, David Lynch, Alan Lynch, Randall Lynch, Heather Hummel, Holly Wasson, Meggan Brown, Bethany Morris, Emily Lynch and Valerie Christianson. Honorary pallbearers were Eric Gater, Luke Lynch, Brad Butler, Joe Butler, Peter Butler, Keith Butler, Ione Baal-Edwards, Terry Baal, Chuck Braby, Craig Braby, Larry Wyer and the class of 1940.
Burial was at Rose Hill Cemetery in Mount Ayr, Iowa.