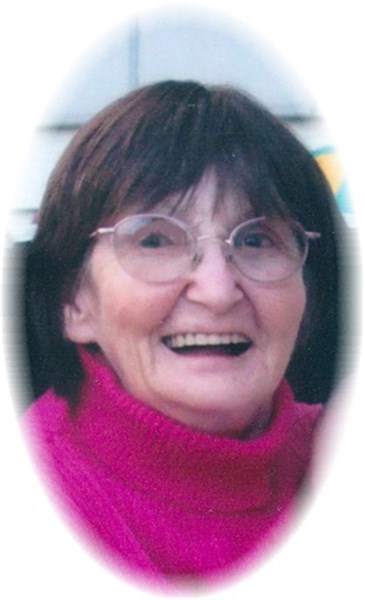 Celebration of Life Graveside Services for Joann Spencer, age 79, of Bedford, who died Saturday, July 19, 2014 at Bedford Nursing & Rehab were held Monday, July 28, 2014 at 11 A.M. at the Fairview Cemetery in Bedford. Visitation was Sunday, July 27, 2014 from 5 to 7 P.M. at the Ritchie Funeral Home in Bedford. Memorials may be directed to the Bedford Library in Joann’s name. Memories can be shared with the family at http://www.ritchiefunralhome.com/ under Obituaries. Arrangements were entrusted to the Ritchie Funeral Home of Bedford.
Joann Myrtle (Waugh) Spencer was born in Worth County, Missouri, February 27, 1935.  Joann was the youngest of five children born to Myrtle Faye (James) Waugh and Carl Albert Waugh.
Most of Joann’s early years were spent in rural Taylor County and rural Ringgold County near Blockton and Redding, where she attended school. In 1951, Joann moved to Bedford where she met her future husband, Clyde Allen Spencer, while attending high school. Joann and Clyde dated for three years before tying the knot on April 2, 1954. To this union, six boys were born, Kenny, Calvin, Mark, David, Todd and Bryan.
Joann truly loved her role as wife, mother and homemaker.  Joann was an excellent cook and while the boys were young, Clyde and Joann raised two large gardens. (Six growing boys and a hard working husband requires much food!) What wasn’t eaten immediately, Joann would can and stock up for the winter.
Joann was also an excellent seamstress, often making clothing items for her boys. It was nearly impossible to tell the difference between what she made and “store bought”.
As the children grew into adulthood and began to have children of their own, Clyde and Joann took great pride in their expanding family. Holidays and birthdays were just ‘one more opportunity’ for Joann to show her creativity by making cards and gifts. “Grandma Jo” looked forward to babysitting with the kids, whether for a few hours or the weekend. She never turned down an opportunity to spend time with the kids.
After Clyde retired the two of them enjoyed traveling. Never any extended trips, but many short vacations to visit family members in different states.
Joann took great pride in the role of “wife, mother, grandmother, great-grandmother and “chief cook and bottle washer!”
Left to cherish the memories of a wonderful mother, grandmother and friend are her sons, Kenny Spencer and wife Belinda; Mark Spencer and wife Penny; David Spencer; Todd Spencer and wife Cindy; Bryan Spencer and wife Carrie, all of Bedford; several nieces, nephews, grandchildren, great-grandchildren and a community of friends.
Preceding Joann in death are her parents, Myrtle Arehart and Carl Waugh; her sister Helen; her brothers, Elvin, Leroy, and James; her husband Clyde in 2008; and her son Calvin in 2011.
Joann  was a devoted wife, mother and grandmother.
Her enthusiasm, humor, insight and kindness will be remembered by her family.
She will be sadly missed by all who knew and loved her.