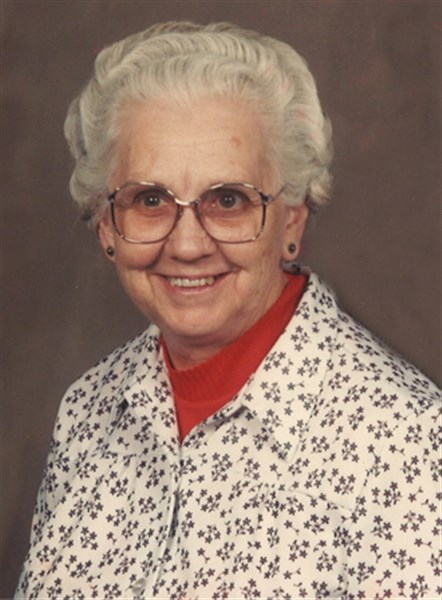 Vera Madeline was born August 6, 1918 to John F. and Anna C. (Holms) Haidsiak the family farm home near Bedford, Iowa.  There were two world-wide crisis at this time – World War I and the deadly flu epidemic, but Vera made the world better bringing sunshine and happiness to her parents and six older siblings.  She had always heard that her siblings had all been born in Nebraska and on her first memorable trip there and hearing Dad say, “Well, kids you are in Nebraska now, the little precocious three year old piped up, “Am I borned now, Mama?”
The family moved to other farming communities Athelston, Blockton and Maloy. Vera’s elementary education was in Athelston and the Miller Country School. Vera remained at home between her eighth grade and Freshman year. This was partially due to her own health problems and also to help in household duties and care for younger sister, Ethel, who was terminally ill.  During Vera’s puberty years and her health situation a doctor told her she would probably be confined to a wheelchair by young adulthood. Knowing Vera, she did not or would not accept this prognosis and refuted it.
Vera enrolled her Freshmanyear in Bedford High School. She would walk two miles to meet a fellow student to ride the remaining 16 miles. Regardless of the weather – rain, sleet, bitter cold, walk she did. The next three years she attended Blockton High School graduating in 1937 with a Normal Training Teaching Certificate. Her first school was at Brush College Country School.  This established a foundation of more than 40 years of successful and dedicated teaching. Vera furthered her formal education attending summer sessions at NWMS College in Maryville, Missouri and taking numerous correspondent courses. Her delight knew no bounds when former students stopped to visit, called or wrote her – all expressing their gratitude and appreciation. However, one ruefully expressed “I Sure didn’t think so at the time.” Another student said she was the only teacher that didn’t send me to the principal’s office. She knew how to handle me.
Vera was teaching sixth grade in Diagonal when Mildred Turnbull, Editor-in-Chief for the local paper made a surprise visit to the classroom. A few days later an article appeared in the paper full of praise for Vera’s teaching. Quote: “In Mrs. Carson’s unobstrusive and positive influence she instructed her students “THINKING TO LEARN and LEARNING TO THINK.
Vera was teaching in a country school in the Conway area and was boarding with August and Mae Johnston when one evening a tall, handsome, farm hand visited his friends to play cards. It wasn’t long that Otis Carson came not just to visit his friends, but to court the school teacher. Otis and Vera enjoyed visiting and playing cards with Otis’ sister and brother-in-law, Doris and Bob Fredricksen. There was mutual love and devotion between the two couples. Then World War II intervened and Otis went off to war. Vera wrote him every day giving love and moral support. Otis returned home in July, 1945 and on August 1, 1945 the couple eloped and were married in Atchison, Kansas. Otis and Vera stayed a short time with Otis’s Dad “Ott” and Aunt Lillie before establishing their own home. Otis began farming; Vera teaching. At times Otis changed occupations, but Vera taught in whatever community they were living – Country schools; towns of Benton, Blockton, Clearfield, Diagonal and Maloy. To continue teaching, Vera would need to attend college and not wanting to be away from Otis and their home, she made a major decision to retire.
Not one to remain idle, Vera stated a new venture, she became a waitress. It wasn’t long before she became manager of the Shamrock Café in Mount Ayr remaining there until it closed.  Ah but she was still teaching, instructing and expecting only best efforts from her employees.
Otis and Vera had lived in various communities, but in 1978 they bought a home in Redding. The main influence was to be close to Vera’s sister Annabel and her family. The two families shared much happiness and “kindred spirit”.
Otis became ill and Vera became his nurse and pillar of strength. She remained constantly by his side. Otis passed away October 9, 1994 and Vera remained in their home. She was able to remain longer due to the services of Public Health, a dedicated group. Then in April, 2012 Vera made the decision to become a resident of Clearview Nursing Home. Under the loving care of Hospice of Cental Iowa (HCI) she passed away at the age of 95 years 11 months 26 days.
Vera was a life long member of the Methodist Church – first in Blockton then transferring to Redding. She was faithful in attending, contributing and working for her Church. Vera was a Sunday School Teacher and active in the U.M.W. serving in offices and President for many years. She read her Bible, marking passages, scribbling notes through out and reading other religious books and articles and then living it.
There were no children to bless Vera and Otis’ home, but there were certainly a lot of kids including numerous nieces and nephews and other children that they would come in contact.
Vera was preceeded in this life by husband Otis, her parents and siblings and their spouse – Helen (Charlie) Hunter, Lucile (George) Hammer, Frank (Vivian) Haidsiak, Nina (Fae) Dukes, Wayne (Jean) Haidsiak, Hazel Haidsiak, Ethel Haidsiak, Max Haidsiak and brother-in-law Harold Walkup. Vera is survived by her sister, Annabel Walkup, of Redding; sisters-in-law Ethel Carson of Creston and Lois Haidsiak of Bedford. Many nieces, nephews, and friends.
There is a void, but the essence of the spirit remains and love never forgotten.