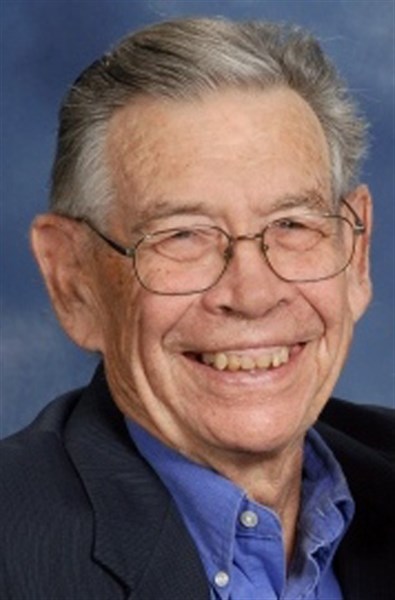 Paul Harvey, 84, died Tuesday, August 5, 2014, at Urbandale Health Care Center. A memorial service was held at 11 a.m. Saturday, August 9, at Urbandale United Church of Christ (UCC).
Paul was born October 20, 1929, in Denver, Colorado to Harold and Hazel Harvey and was raised in Kellerton, Iowa.  He married his high school sweetheart, Darlene Rainey, in 1949 and they made their home in Urbandale where they raised their three children.
Paul retired as a sales rep from Wyeth Hardware. He was a member of the Urbandale Lion’s Club and also devoted many hours to volunteering at the DMARC Food Pantry. Paul enjoyed spending time with Boy Scout Troop #206 at Urbandale UCC which he helped found.
Paul is survived by his wife of 65 years, Darlene, his children,  Debra (Bill)  Rogers of Des Moines, Terry Harvey of San Diego, California and Brenda (Mike Meredith) Fuller of Bloomington, Minnesota; four grandchildren and three great-grandchildren. Paul was preceded in death by parents and his sister, Dorothy Page.
Memorial contributions may be made to Urbandale UCC or the Urbandale Lion’s Club.
Online condolences will be welcomed at IlesCares.com.