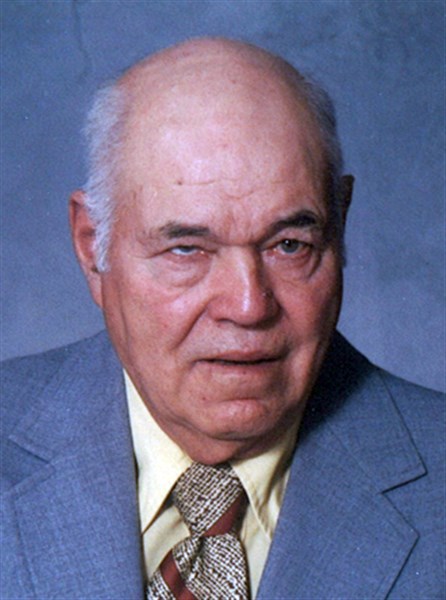 Gerald Roy Gardner, better known as Newt, passed away in the Mount Ayr Health Care Center August 11, 2014 at the age of 91.  Gerald, one of five boys born to Roy and Madge Gardner, was born November 8, 1922 in Mount Ayr, Iowa. He graduated from Mount Ayr in 1940 and on January 22, 1950, was united in marriage to Mary Jane Huddleston in Hiawatha, Kansas. They were blessed with five children, Richard, Jerry, Linda, Pat and Lynn. Newt began his working life by bringing some of the first electricity to the rural areas of the Midwest, stretching from Nebraska through Iowa and Illinois. He returned to the family farm, raising crops, animals and kids. Although he enjoyed working on the farm, his passion was hunting. He could be found coon hunting but was mostly interested in quail and pheasant hunting. Opening day was always a special time at the house as he was sure to have friends from the Des Moines area and even Canada come down to hunt with the Sodbuster, as they liked to call him. He was also joined on most weekends by his sons-in-law. Newt trained his own hunting dogs, and although you might not be able to tell it from some of the names he called his dogs when they weren’t hunting properly, he was secretly proud when his dogs always outperformed the high-priced dogs of other hunters. After a hunting accident that cost him his sight in one eye, he could still out-shoot almost everyone. Even though he didn’t get out much the latter part of his life, he was still a friend to many, especially the nurses in the nursing home. Many of them affectionately called him Grandpa and he grew very close to one special nurse. He was voted King on Valentine’s Day last year. Newt was a person that loved the land and what it could provide him and his family.
Gerald was preceded in death by his parents, Roy and Madge Gardner, wife Mary, brother Marion, sisters-in-law Mary Ann Gardner, Iris Gardner, Geneva Gardner and Alice Gardner and an infant grandson, Curtis Shaw.
Left to mourn his passing are his remaining brothers, Glenn of Creston, Wayne of Hemet, California and Dean (wife Jackie) of South Salem, Ohio, sister-in-law Carolyn Gardner of Humboldt, his children Richard Smith of Omaha, Nebraska, Jerry of Humboldt, Linda Shaw (husband Roger) of Red Oak, Pat Teply (husband Larry) of Diagonal, and Lynn Gray (husband Dale) of Milan, Missouri, eight grandchildren, Kelly Gardner (wife Karmen) of Pella, Jodi Gardner of Humboldt, Breanne Teply Melody (husband Andy) of Lake City, Austin Gray (wife Megan) of Blue Springs, Missouri, Ryan Shaw of Council Bluffs, Skyler Shaw (wife Melissa) of Red Oak, Rick Smith (wife Tamira) and Stuart Smith, both of Colorado Springs, Colorado, eleven great-grandchildren, and many cousins, nieces and nephews.
Services were held Thursday, August 14, 2014 at the Watson Armstrong Funeral Home in Mount Ayr with Reverend Terry Roberts officiating.
Casket bearers included Ryan Shaw, Skyler Shaw, Austin Gray, Kelly Gardner, Andy Melody and JP Whittington. Burial was in the Rose Hill Cemetery in Mount Ayr.
A memorial fund has been established for the United Church of Diagonal and the Diagonal Community Scholarship Fund.