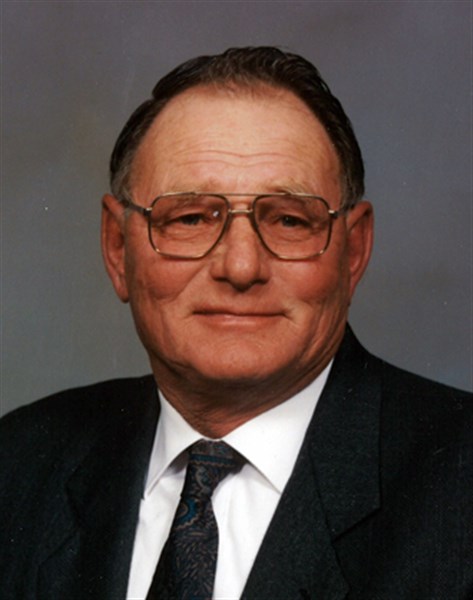 Carol Wayne Sobotka, better known as Oss, was born on  November 25, 1934 in Creston, Iowa to Otto and Albena (Jezek) Sobotka and passed away August 28, 2014. Oss graduated from Diagonal Community School in 1953 and in the fall he enlisted in the service and spent part of his tour of duty in Japan during the Korean Conflict. Oss often told “interesting” stories from these years.
On February 11, 1956, Carol married Arlene (Butt). Their life together began in Des Moines where they lived for four years. During this time, Randall Wayne and Gary Lee were born. In 1960, Oss and Arlene returned to Diagonal to farm the home place. Pamela Rae and Shelly Lynn soon joined the family followed later by Douglas James.
The Iowa State Fair was an annual event that Oss loved. He and the “Diagonal gang” would head to the hill for a few days of fun. Another of Oss’s favorite past times was tractor pulling, and this love was passed down to his children and grandchildren.
Oss had a strong sense of community. Working to make it better was always a priority to him. In the early 90s he, along with several other community members, had a vision to construct a lake at Diagonal. After years of hard work Fogle Lake became a reality. Another organization important to Oss was the Diagonal Lions. He was a 45-year member and served in many capacities. He was also a member of the Morris-Herrold Legion Post #395, Calf Club, and nine-year member of the Ringgold County Fair Board. For many years Oss could be found setting up sound systems, riding the Mule Skinner Pulling Sled, volunteering for the fire department, helping Arlene with the Printing Museum, improving the campgrounds, and completing the ‘Bridge on the Move’ project.
Nothing was more important to Oss than his family.  He taught his children by example and was always willing to help with any project they had going. As the family grew, gatherings were a place of much laughter, noise, and chaos. He was especially proud of his grandchildren and great-grandchildren; rarely missing any of their activities.
Oss was preceded in death by his parents Otto and Albena, father and mother in-law Donald and Esther Butt, brother Robert, sisters in-law Shirley and Margaret Sobotka and niece Sharon Sobotka Overholser.
Left to mourn his passing are wife, Arlene, children Randy (Jan) of Des Moines, Gary (Darla) of Mount Ayr, Pamela (Robert) Grace, Shelly (Alan) Bentley, Doug (Darla) Sobotka all of Diagonal, 13 grandchildren and 10.9 great-grandchildren, sister Dorothy Sobotka and brother Marvin, nephews Jim and Rex Sobotka and many other friends and relatives. Watson-Armstrong Funeral Home in Diagonal is in charge of the arrangements.
Services were held Wednesday, September 3, 2014 at the United Church of Diagonal with Reverend Edward Shields and Reverend Eydie Stephens officiating.
Active casket bearers included J.P. Whittington, Jason Smith, Kenny Sobotka, Jack Stephens, Charlie Fletcher and Robert Schlapia.
Honorary casket bearers included Dave Wiley, Bill Hingeley, John Rychnovsky, Claire Newton, Chuck Klejch and Art Garrett.
Military rites were by Morris Herrold Post 395 and burial was in the Bohemian Cemetery in Diagonal.
Memorial funds have been established for the United Church of Diagonal Building Fund, Diagonal Printing Museum and the Ringgold County Fair.