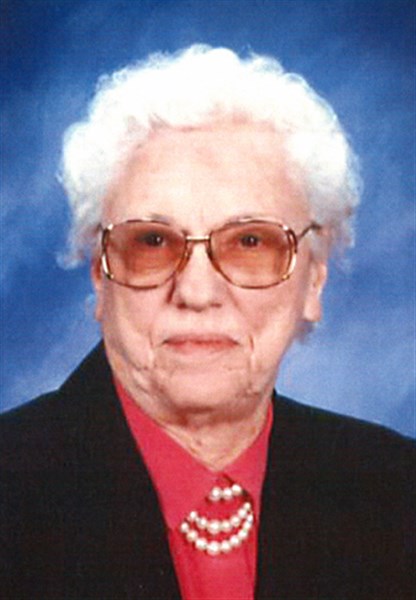 Esther R. Allen, daughter of Forrest and Millie “Lucile” (McCleary) Merrill, was born December 9, 1917 at Kellerton, Iowa. In the 1920’s, the family moved to Colorado where her dad raised cattle and wheat. Esther graduated high school in 1935 at Wray, Colorado. Esther returned to Kellerton to care for her grandparents. She also worked in the local doctor’s office and a grocery store.
On January 17, 1942, she was united in marriage to Clifford B. Allen in Bethany, Missouri. They moved to a farm west of Kellerton where she lived the most years of her life. In addition to being a loving wife and caring mother, Esther worked in the Ringgold County Treasurers Office and was the Kellerton City Clerk until 1982. Esther was active in the Kellerton United Methodist Church and the U.M.W. She enjoyed the neighborhood card club.
Clifford passed away on February 19, 1987. In the early 1990’s Esther moved into Kellerton. In August of 2014, she moved to Monticello, Illinois to be close to family as her health declined.
Esther passed away at the Piatt County Nursing Home in Monticello, Illinois on October 21, 2014. She was preceded in death by her parents; husband; two brothers Maynard and Sam; and a sister, Phyllis, at age 3.
Those left to cherish her memory include her two sons Don and wife Ann of Grand Mound, Iowa and Dale and wife Barbara of Deland, Illinois; four grandchildren Greg, Brian, Todd, and Christy; two great-grandchildren Rae Anne and Charley; brother Dean Merrill and wife Rose of Winterset, Iowa; nieces, nephews; other relatives and friends.
Services were held Saturday, October 25, 2014 at the kellerton united Methodist Church in Kellerton, Iowa with Rev. Jodi Rushing officiating.
Active Casketbearers were Don Allen, Brian Allen, Greg Allen, Dale Allen and Todd Allen.
Memorials may be directed to Kellerton United Methodist Church and to the donor’s choice.