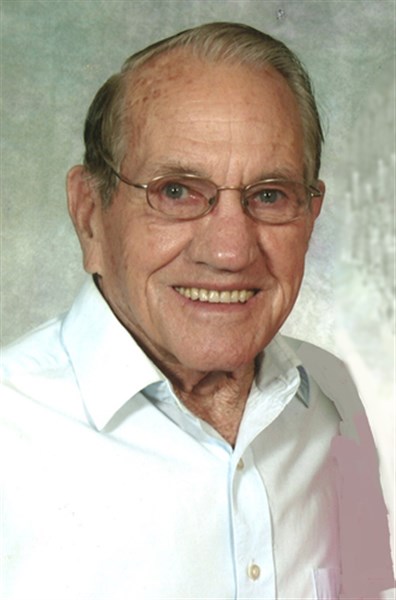 Dean Mark Merrill was born September 30, 1924 at the ranch his parents, Forrest R. and Millie “Lucile” (McCreary) Merrill, owned near Wray, Colorado. He grew up and was educated at Wray, Colorado. Dean was drafted into World War II in 1942. He served in the European Theater, England, Germany, France, and Belgium. Dean returned to the United States in 1946 and received an honorable discharge.
Dean loved driving trucks. In 1949, he started driving a REO Truck, hauling grain. At this time, Dean married and to this union two sons were born; Wayne D. Merrill of Virginia and Gerold L. Merrill, who lives in California. Dean settled in Greeley, Colorado and his life was spent as an over the road truck driver. From 1967 to 1991, Dean drove Denver to Chicago, to the Northwest, coast to coast and border to border, delivering freight. Dean was recognized as a safe driver for 3,000,000 accident free miles. Dean remarried and was a step-father to Ruth’s three children. They were happily married until she passed away from cancer in 1997. Dean moved back to Iowa in 2000 to be near his brother, Sam, and sister Esther. Dean married Rose (Motsinger) Fugate of Kellerton, Iowa. Dean and Rose enjoyed their time together and have been living in Winterset, Iowa.
Dean passed away November 1, 2014 in Winterset. He was preceded in death by his parents; wife Ruth; brothers Maynard & Sam Merrill; and sisters Phyllis Merrill and Esther Allen.
Survivors include his wife Rose Merrill of Winterset, IA; step-children Vickie (Bob) Lewis of Marshalltown, IA, Tammy Fugate of Houston, TX, Michael (Cindy) Fugate of Des Moines, IA, and Rob (Jennifer) Fugate of Marshalltown, IA; 5 step-grandchildren; nieces, nephews, other relatives, and friends.
Dean was cremated and a memorial service will be held at Watson-Armstrong Funeral Home in Mount Ayr on Sunday, November 9, A memorial fund has been established in his name to be decided later.