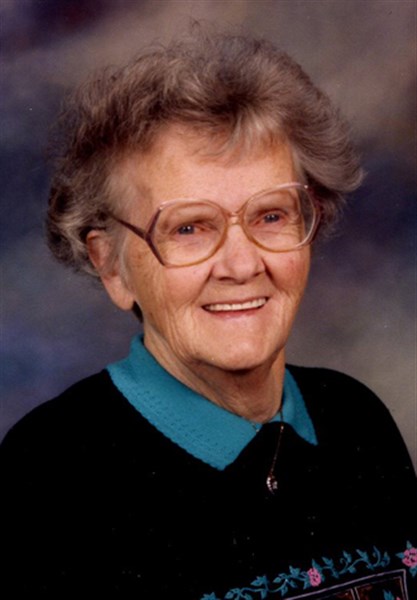 Mona Mary Dwight, 91, of Burlington, died at 7:55 p.m. Monday, October 27, 2014, at her home surrounded by her loving family.
Born September 14, 1923, in Burlington, she was the daughter of Albert Frederick and Clara Alvina Jackson Gerdom.  She married John R. Dwight on February 14, 1946, in Burlington.  They later divorced.
Mona worked at National Research Bureau and Schramms.
She was a 1941 graduate of Burlington High School.
She was of the Protestant faith. She loved playing tennis and was the city tennis champion at the age of 18. She also enjoyed watching television, especially her favorite show, NCIS. She was a generous and loving woman, who held no grudges. She received lots of joy and comfort from her dogs Molly, Tinkerbelle and JoJo. Her favorite singers were Perry Como, Eddie Arnold, Von Monroe, and Andy Williams. Most importantly she cherished time with her family especially her grandchildren and great-grandchildren.
Survivors include two sons, Tim (Nancy) Dwight of Park Rapids, MN, and Michael (Christine) Dwight of Burlington; two daughters, Mary (Owen) Martsching of Mount Ayr, and Martha Kibling of Burlington; 11 grandchildren, 16 great-grandchildren; and several nieces and nephews.
She was preceded in death by her parents, one brother, Warren Gerdom, one sister, Jean Harris and one great-grandchild, Liam Kibling.
Cremation has been entrusted to the care of Thielen Crematory.
The Celebration Of Life for Mrs. Dwight will be 11:00 A.M. Saturday, December 27, 2014, at Parkside First Baptist Church with her family officiating. A time of food and fellowship will be held at  Parkside First Baptist Church following the service.
Memorials have been established for PAW Animal Shelter in Fort Madison and Great River Hospice.
Thielen Funeral Home & Crematory is in care of the arrangements.
Condolences can be sent to the family by visiting Mona’s obituary at www.thielenfuneralhome.com.