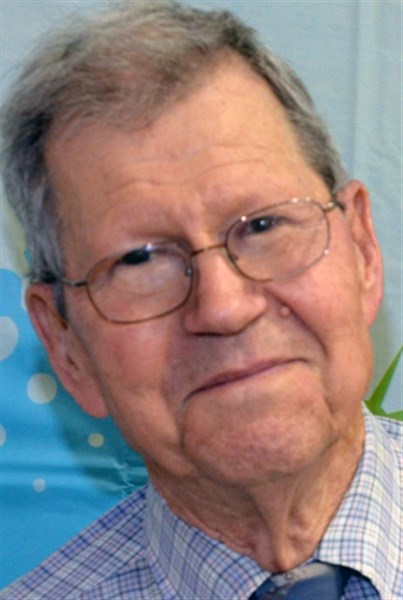 Ivan L. Dennis, 88 of Independence, Missouri passed away Friday, November 7, 2014. Funeral service were Wednesday, November 12, 2014 at Liberty Church of Christ, 1401 Glenn Hendren Drive, Liberty, Missouri. Burial followed in Rose Hill Cemetery, Mount Ayr, Iowa.  In lieu of flowers, the family suggests memorial contributions to Liberty Church of Christ Missions or Christian Family Services. Ivan was born September 10, 1926 in Taylor County, Iowa to Vernon and Carrie Dennis. He graduated from Mount Ayr High School and attended college at Iowa State University in Ames, Iowa. In addition, he studied electronics via correspondence course. He served his country proudly during WWII and is a veteran of the US Army. He married Nadine Burton in 1949 and they made their home in Mount Ayr, Iowa with her two children, Keith and Lynn. Ivan was a farmer, also working at the Mount Ayr Mill & Feed and managed the Mount Ayr Hotel.  In 1963 he accepted a millwright position with Western Electric and moved the family, which now included Janet and Mike, to Independence, Missouri. He worked for Western Electric for 23 years and retired in 1986. His post retirement years have been spent in service to God, and community causes as well as caring lovingly for his dear wife, Nadine. He is preceded in death by his parents and sons, Keith and Lynn. Ivan is survived by his wife of 64 years, Nadine; children, Janet Richardson with her husband John and Mike with his wife Linda. Also surviving is his brother Thomas Dennis with his wife Anne, 13 Grandchildren, 15 great-grandchildren and two great-great-grandchildren. Ivan’s legacy is well stated by his brother, Thomas’s tribute; “My Brother is a great example of a life-long, Godly, moral character – humble, extremely patient, with the virtues of endurance, forgiveness and stability. He loves the Lord, his family, his country, and his fellow man. His speech and deeds are consistent with the Christian principles he embraces.” Arrangements Newcomer’s Noland Road Chapel 816-252-8900