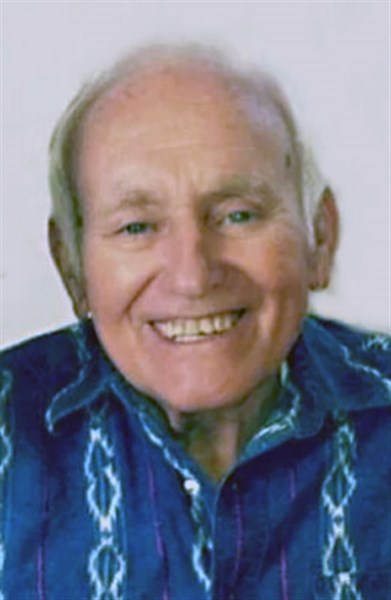 Franklin J Smith, oldest child of Jim and Georgia Smith was born on September 11, 1932 in Mount Ayr, IA, and went home to Jesus on November 15, 2014 at Arbor Springs in West Des Moines, IA.
On December 9, 1951 Hank married his high school sweetheart, Phyllis Ann Fletchall. They were married over 55 years at the time of her passing.  Also preceding him in death are his parents, father-in-law Lee Fletchall, and brother Kenneth Smith.
He is survived by his three children, Terrie Fenstermann and husband Matt, Randy Smith and wife Connie and Trudy Taylor and husband Scott, 10 grandchildren, 18 great-grandchildren, a sister Deb Smith, a sister-in-law Connie Worthington and husband Jim and his mother-in-law Margaret Fletchall.
After graduation Hank started his own business called Hank’s TV and Appliances. A few years later he purchased the Texaco station on Hwy 2 and named it Smith Oil, eventually relocating it to the east side of town where it is to date. Hank got “hooked” on racing in the 50’s. He started racing at the Mount Ayr Speedway going on to race sprint cars all throughout the U.S. He became very well known throughout the racing family, making many long lasting friendships. Hank is a member of the Knoxville Sprint Car Hall of Fame. In the 60’s Hank bought a farm with his long time friend, Gerald Willey.  It was known as “Green Acres” by both families. In the 70’s he added Auto Parts stores to his collection of businesses. Of all the ventures Hank welcomed into his life he found that farming was his love. In the 80’s he started adding to his farming operation continuing to do so to date.
Hank loved to visit about his farms. You could find him and his faithful companion, Blackie, early every morning at the Coop just hanging out to visit with the other farmers. Another place you could count on finding him was Smith Oil greeting every one that came in and drinking his coke. For years he spent Monday nights in Grand River playing cards with his poker buddies.  You could always count on him to be there. Even when his mind wasn’t 100% that’s the one thing he could remember to do!
Hank never knew a stranger.  He had a welcoming smile and a great personality that just made it easy to talk to him. He loved having his family getting together. He enjoyed his grandchildren hanging out with him! Hank will be missed very much by all of his family and friends.
“Good things don’t come to people who wait…they come to those who work their A**** off and never give up”  This quote pretty much sums up Hank’s life!
Services were held Wednesday, November 19, 2014 at the First Christian Church in Mount Ayr with Rev. Chris Conklin and Pastor Barton Shields officiating.
Honorary casket bearers were Jennifer Myers, Christi Shields, Rebekah Peterson, Jamie Cornelius, Kasey Randall, Amy Taylor and Hannah Lepper.
Active casket bearers were Chadd Smith, Michael Taylor, Brad Lepper, Joshua Taylor, Chris Cornelius, Tyler Peterson and Brett Randall.
Burial was in the Rose Hill Cemetery in Mount Ayr.
Memorial funds have been established in his name to National Sprint Car Hall of Fame and the Mount Ayr Aquatic Center.