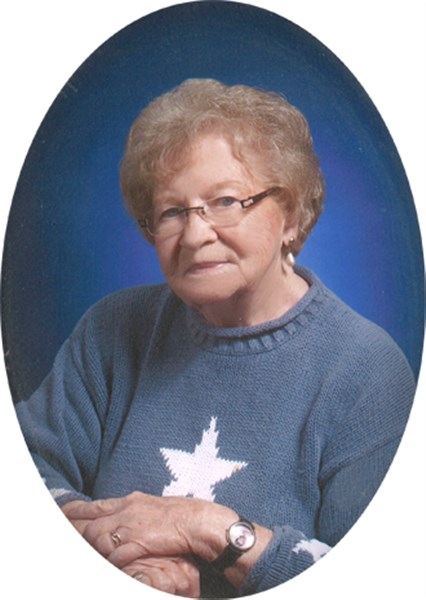 Doris Mae Main was born July 18, 1925 on the Main family farm in Liberty Township, Ringgold County, Iowa. She was one of 11 children born to the late Corwin Ernest and Mabel Mae Wood Main.
She attended country school in the county through the eigth grade and graduated from Mount Ayr High School in 1941.
Doris was united in marriage to Elza Lee Fetty on February 10, 1946. To this union were born two sons, Steven Dale and Alan Lee.
Doris and Elza loved to dance, especially waltzes, with their favorite being “Somewhere My Love.” The husband and father passed away on March 14, 1973.
Doris was united in marriage with Gilbert L. Rule on December 21, 1974 and became stepmother to his children Marcia, Lynette, David, Douglas and Shelly. Gib was taken in death on December 5, 1978.
She worked in several business offices in Mount Ayr, her last position being with the Mount Ayr Record-News, from which she retired in 1995, after 32 years of service. After her retirement, she spent much of her time in volunteer work at the two nursing homes in Mount Ayr and with the American Red Cross Bloodmobile.
She was an active member of the Mount Ayr Preservation, Inc., the Antiques Club, the Ringgold Tourism Corporation, the Red Hat Society and the Ringgold County Hospital Auxiliary.
Doris was baptized at an early age and joined the United Methodist Church in Mount Ayr, where her membership has remained until her death.
Preceding her in death from her immediate family besides her two husbands, were her parents, Corwin and Mabel Main; four sisters-Phyllis Louise Main, who passed away in 1934 at the age of two, Maxine L. Kendig, in November 1996, Arlene Marie Kimball in February 1998 and Mildred H. Sobotka in June 1998; two brothers-Marvin in 2011 and Virgil in 2013; brothers-in-law, Cecil Kendig, Clarence Barker and Robert Shaffer and one sister-in-law, Jeannine Main.
She is survived by two sons, Steven Dale Fetty of Mount Ayr and Alan Lee Fetty and his wife, Rose, of Beatrice, Nebraska; five stepchildren, several stepgrandchildren and stepgreat-grandchildren; brothers Larry Main and his wife, Fran, of Magalia, California and Lyle Main and his wife, Virginia of Mount Ayr; two sisters Juanita Shaffer of Atascadero, California and LaViece Barker of Mount Ayr; sister-in-law Lucille Main; numerous nieces and nephews, great nieces and nephews, cousins, other relatives, friends and her beloved dog, Megan.