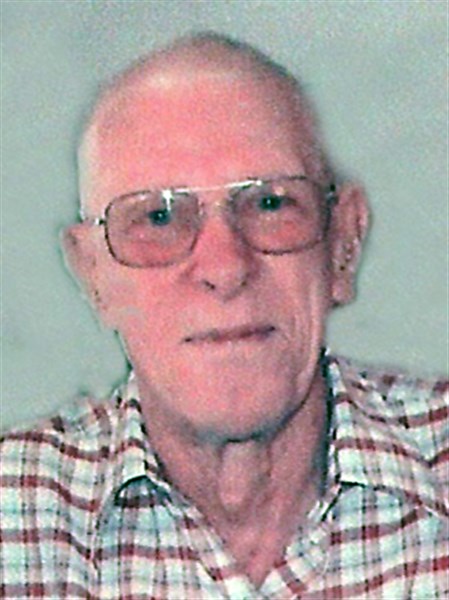 Earle M. Schad, 97, of Mount Ayr Iowa passed away Monday, December 8, 2014 with his family at his side at the Mount Ayr Health Care Center. Earle left this life as a unsung artist in farming, pencil art, woodworking, geneology, his personal naval history and publishing of his own book.  A celebration of life visitation for Earle and Mona will be held from 11 a.m. to 1 p.m. Saturday, December 13 at the Watson-Armstrong Funeral Home in Mount Ayr. Private family burial will be held at the Oakland Cemetery south of Shannon City. Memorials will be decided later to stay in Ringgold County.
Earle was born July 25, 1917 in Fontanelle, Iowa to Fay Alexander Schad and Lulu Frances (Rosebaugh) Schad. He served his country in the United States Navy  from 1941 to 1947. On December 2, 1948 he was united in marriage to the love of his life, Althea Ramona Hineline at the First Christian Church in Creston. Earle spent most of his adult life in Ringgold County where he farmed and retired as shop foreman for Ringgold County.
Earle was preceded in death by his parents; wife, Althea (Mona) Schad in 2011; infant daughter; two sisters, Wynette Schad and Cheryl Arnold. Left to cherish his memory are his two sons, Larry (wife Joyce) Schad of Creston and Gary (wife Carol) Schad of Clive; five grandchildren; thirteen great-grandchildren.
Earle Schad’s family would like to thank the Maple Ridge Assisted Living and Mount Ayr Healthcare and their staff for the great care they received.