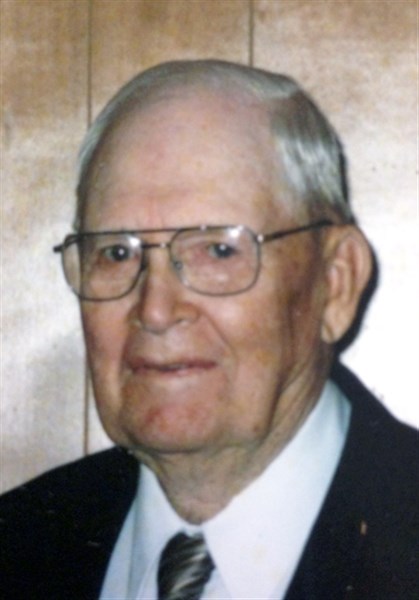 Dean Austin Cobb, the youngest son of Glenn A. and Grace Goforth Cobb was born on a farm south of Blockton on June 8, 1919, living there all of his life, departing on December 17, 2014 at the age of 95.
He attended country school (Brush College), and later graduating from  Blockton High School. His life was spent on the farm raising livestock and grain farming and always practiced and promoted soil conservation with his brother Charles.
At an early age he obeyed the Gospel and became a member of the Tent Chapel Church of Christ, and remained a faithful and active member in all church activities.
On August 3, 1958 he married Evelyn Wilson, a school teacher from Rippey, Iowa. They made their home south of Blockton.
In 1968, they became foster parents of two children, David A. Goff and Vickie Lynn Goff who were taken into their home and was always a part of their lives.
Evelyn passed away in 1995 and later in 1998, Dean married Marietta Stephens. They also made their home south of Blockton on Dean’s farm.
Dean was the National weather observer for the Blockton area until retiring in March 2002. In 1993 he received the noted John Companius Holm award, which was given as one of the 25 awards to volunteer weather observers from the U.S. region for the 35 years of outstanding service along with other awards given for his 44 years of faithful service.
Dean was interested in the church and community affairs, and especially wanting people to become a Christian, live a Christian life with the hope of life eternally in heaven.
Dean discontinued his farming operation in the spring of 1996.
Surviving are his wife Marietta, two foster children, David (Jocelynn) Goff, Vickie (Beryl) Jordan, six foster grandchildren, Michelle Goff, Jennifer (Brandon) Sales, Kimberly (Paxton) Edwards, Chrystal Goff, Paul Jordan, Aaron Lafever, one foster great-grandson, Kadesh Edwards, step children, Toni (Ron) Schlapia, Jacque (Kevin) Nelson, step-grandchildren, Jen (Tim) Schaefer, Stef (Aaron) Curry and Brooke Nelson, step-great-grandchildren, Kate, Tyler, and Colton Schaefer, and Zakkary Curry. Nieces and nephews and families, Roberta Milinsky, Anita (Jim) Burr, Galen (Kathy) Cobb, and Marla (David) Fetters.
Preceding Dean in death were his wife Evelyn, parents, brother Charles and two sister-in-laws, Cleta and Ann Cobb.
Funeral Services were Saturday, December 20, 2014 at the Prugh-Dunfee Funeral Home in Grant City, Missouri. Art Wallis and Mike Lewis officiated.
Internment was in the Rose Hill Cemetery in Blockton, Iowa. In lieu of flowers memorials may be made to Tent Chapel Church or Blockton Community Building Fund.