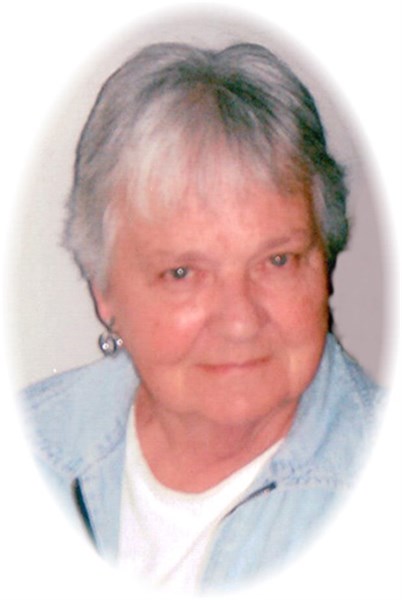 Celebration of Life Services for Garnita Ewart, age 84, of Bedford, who died Tuesday, December 23, 2014 at Bedford Nursing & Rehab surrounded by her family was held Monday, December 29, 2014 at 11:00 a.m. at the Ritchie Funeral Home in Bedford. Visitation was Monday morning from 9:00 a.m. until service time with the family greeting friends. Private family internment will be held at the Fairview Cemetery at a later date. Memorials can be given in Garnita’s name. Memories can be shared with the family at www.ritchiefuneralhome.com under Obituaries. Arrangements were entrusted to the Ritchie Funeral Home of Bedford.
Garnita Ellouise (Laird) Ewart was born October 10, 1930, in Mount Ayr, Iowa the daughter of Russel Laird and Winnie (Payton) Laird. She grew up attending school in Kellerton and Mount Ayr, graduating with the Class of 1948. After graduation, Garnita went to Omaha to attend Commercial Extension Business College then to Des Moines to take business administration classes at Drake University. She worked in Des Moines for a short time before moving to Bedford where she worked at Cudahy’s.  She met Bill Ewart at a dance in Blockton and the couple was united in marriage on December 19, 1953, in Des Moines, Iowa. To this union three sons were born, Danny, Billy Jr., and Ricky.
Garnita worked as the Director of the Taylor County ASCS office from 1962, a position she held until 1988, when she was promoted to Southwest Iowa District Director. She held this position until her retirement in 1992, after 34 years with the Department of Agriculture. After retirement, Garnita got her Real Estate Broker’s License. She moved to Kimberling City, Missouri where she sold real estate in the Branson area before returning to Bedford, where she and Rick sold real estate under ‘Strictly Farm Realty’ together.  Bill passed away in June of 2001.  Garnita served as Mayor for the City of Bedford from January 1, 1998 until December 31, 2001, a position she thoroughly enjoyed.  Garnita was a member of the Bedford American Legion Auxiliary, serving as President in the 1950s, the Order of Eastern Star, President of IASCO during her time with the ASCS office and later in life she was a member of the Red Hat Society.
Garnita and Bill enjoyed traveling together on their motorcycles, having been to 49 of the 50 states, all except Alaska   She enjoyed the outdoors and enjoyed boating and even owned her own jet ski.  While living in Kimberling City, Garnita enjoyed the entertainment in the Branson area. Over the years she enjoyed collecting porcelain head dolls.  However, her greatest joy was keeping in touch with her family and being involved in their lives and activities. Garnita had a strict hand in the upbringing of her sons and enjoyed watching her grandchildren grow up.
Left to cherish the memories of a wonderful mother, grandmother and friend are her three sons, Dan Ewart and wife Doreen of Placentia, California and their children, Mike Ewart and wife Christine and their children Jacklyn, Brandon and Jaydan; and Steve Ewart and wife Tawny and their son, Matthew; Bill Ewart, Jr., and wife Peggy of Bedford, his children Brad Ewart and wife Theresa and their children, Bryson and Trace; and Ricky J. Ewart and his sons, Brandon and Xander; and Peggy’s children, Kerra Strong and husband Zach and their children, Sydney and Courtney; and   Zach Siefering; Rick Ewart and wife LouAnn of Bedford and their children Jackie Minor and husband Brent and their children, Lucas and Makenna; Heather Hayes and husband Dusty; and Gary Ewart; two sisters, Elladeen McGahuey of Mount Ayr, Iowa; and Kathie Kniskern and husband Ted of Dumas, Texas; three sisters-in-law, Bunnie Joe Scott and husband Ross of Excelsior Springs, Missouri; Myrna Laird of Spencer, Iowa; and Lorrena Laird-Malin of Cherokee Village, Arkansas; along with many other relatives and friends.
Preceding Garnita in death are her parents, Russel and Winnie Laird; her husband Bill Ewart Sr.; two brothers, Larry Laird and Duane Laird.
Although Garnita will be greatly missed, her love and inspiration will live on through her family.
Mission Complete!