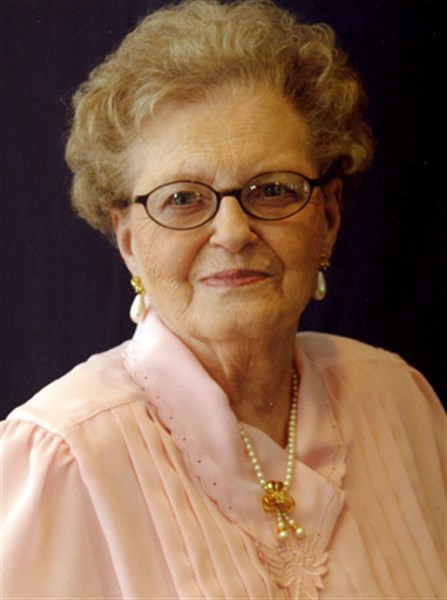 Mary Eileen (Yashack) Lesan was born March 24, 1920 in Mount Ayr, Iowa the daughter of Andrew Howard and Bessie May (Stuck) Yashack. Eileen was the oldest of four children. When Eileen was five years old the family moved to Lomax, Illinois for one year. Then they moved to Peoria, Illinois until the depression hit and they moved back to rural Mount Ayr. In the summer of 1933 the family moved to Diagonal, Iowa.  Eileen resided the rest her of life in Ringgold County.
She attended school in Mount Ayr and Diagonal, Iowa. She graduated in 1938 from Diagonal High School. On December 31, 1945 Eileen was united in marriage to Charles Joseph Lesan, son of Howard and Myra Bowles Lesan of Mount Ayr.  To this union three children were born, Steven Charles, Sharon Lee, and Susan Lynn. Steven, a retired teacher lives in Kansas City, MO. Sharon lives in Mount Ayr and is a resident of the Ringgold County Group Home.  Her daughter Susan is employed by Dowling Catholic High School as a teacher and lives in Des Moines, Iowa.
The couple lived with Charles’s parents on their family farm for many years.  Charles passed away October, 1970.  Eileen and Sharon continued living on the farm until the two moved to town in the fall of 1986.  Through the years Eileen clerked at J.B. Currie Variety Store in Diagonal, Ben Franklin Store, Anthony’s Store and the Twin Shop in Mount Ayr. She worked in the Deputy Clerk of Court for Asa Huggins from 1941 through 1946 and then for Rollin Noble from 1973 to 1985 when she retired in May.  She moved to the Clearview Estates in May, 2006 and later to the Clearview Homes March 2011.
Throughout her lifetime Eileen participated in several organizations. She was an active member of the First Christian Church, P.E.O Sisterhood, the American Legion Auxiliary, Modern Mothers and several other clubs. Being a wonderful cook, she enjoyed entertaining family and friends. She looked forward to playing cards and games with family and friends. She will be dearly missed by all who knew her. Eileen passed away December 26, 2014 in the Clearview Home in Mount Ayr.
Eileen is survived by her children Steven, Sharon and Susan. Extended family includes her sister Virginia Cardamon of Des Moines; nieces Janet (Thomas) Ford, Marilyn (Steve) Werner, Vicki (Mark) Miller, Theresa (Roy) Shaw, Nancy Peters Janover and Linda (George C) Peters; nephews Frank (Joan) Cardamon, Jr., Shelly Yashask and great nieces & nephews; other relatives and friends.
Eileen was preceded in death by her husband Charles Lesan, her parents Andrew and Bessie Yashack; father and mother-in-law Howard and Myra Lesan; brother Richard (Dick) Yashack; sister Marilyn Yashack; brother-in-law Frank Cardamon; sister-in-law Marjorie Yashack; nephew Ronald Yashack; brother-in-law Bernard Peters; and sister-in-law Anne Peters.
The family would like to thank the staff for all the loving care extended to Eileen during her stay at Clearview Estates and Clearview Homes. Also a special thanks to Hospice of Central Iowa for their professional care and compassion.
In lieu of flowers, memorial contributions may be made to the Ringgold County Group Home.
Funeral services were held at the Watson-Armstrong Funeral Home in Mount Ayr, Iowa on Tuesday, December 30, 2014 at
11:00 a.m. Pastor Chris Conklin officiated the service while Nancy Sackett accompanied Mary Davenport and Melanie Knapp as vocalists. Musical selections were “In The Garden,” “Amazing Grace” and “If I Were a Butterfly.” Pallbearers were Frank Cardamon, Troy Ford, Steve Werner, Thomas Ford, Mark Miller, and Shelly Yashack. Burial was at the Rosehill Cemetery in Mount Ayr, Iowa.