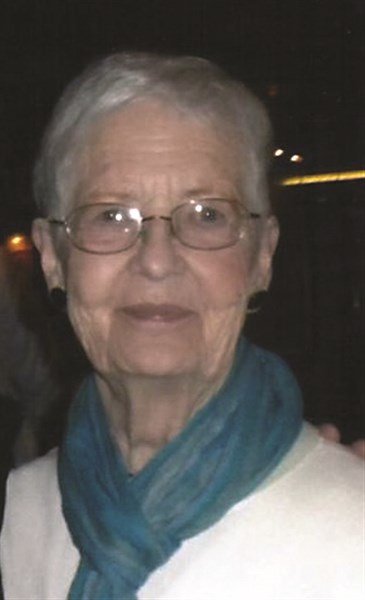 Helen C. Terry, of Mount Ayr, IA died on January 11, 2015, in Des Moines, IA, after a short battle with breast cancer. She was 85. Helen Ann Copenhaver, daughter of Robert George and Mary Loretta (Johnson) Copenhaver, was born in Freeport, IL on November 16, 1929.  She was very proud of growing up on the family farm on the outskirts of Polo, IL, where she enjoyed raising and riding horses. She was particularly fond of her Arabian Silver Dawn. Helen was also proud of attending a rural one-room elementary school, Buffalo Grove near her childhood home; she was graduated from Polo (IL) Community High School in 1947 and from Colorado College, Colorado Springs, CO in 1951.
Helen married Jack R. Terry and to this union four children were born:  Martha Ann, Barbara C., Thomas Robert and Sandra Jean. The family spent fifteen years in Lamoni, IA, where Jack and Helen owned the weekly newspaper, The Lamoni Chronicle. In 1965 they purchased The Mount Ayr Record-News, and in July of 1966 the family moved to Mount Ayr. Helen began working at the Record-News in 1968 and worked for nearly 28 years until retiring in August of 1998.
Helen was an active member of the Mount Ayr United Methodist Church, Chapter CK, P.E.O., Ringgold Singers, Chamber of Commerce and the Robert Burns Chapter of the Iowa Scottish Heritage Society.  Helen was an avid sports fan: she rooted for the Mount Ayr Raiders, Iowa Hawkeyes and Chicago Bears.  She and her daughter Sandie shared a love of tennis and Helen paid special attention to the careers of Pete Sampras, Roger Federer and Andy Murray.
Helen loved to bake, especially bread, and often shared rye, white and whole wheat loaves with neighbors and friends around town. She cared deeply about giving back to the community, volunteering at the hospice in Mount Ayr and the elementary school.
She is survived by her daughters: Martha Ann Terry of Pittsburgh, PA; Barbara C. McAnelly and husband Doug, of Indianola, IA; Sandra Jett and husband David, of Mountain Home, ID, who called her variously Mom, Mother and Helen, depending on the circumstance; by her four grandsons, Christopher Chiusano and wife Deana, of Cranberry Township, PA, Terrence Chiusano of Pittsburgh, PA, Dru McAnelly and wife Meredith, of Bondurant, IA and Wade McAnelly and wife Jamie, of Minnetonka, MN, (who all called her Grammy); and by five great-grandchildren, living in Pennsylvania and Iowa, who called her Super Grammy; and by one brother, James Copenhaver and wife Ann, of Lake Forest, IL.
She was preceded in death by her parents, her elder brother, Robert Copenhaver and wife Esther and by her son, Thomas Terry.
A visitation will be held at Watson-Armstrong Funeral Home in Mount Ayr on Thursday from 12-8 p.m. with the family present Thursday evening from 6-8 p.m. A Celebration of her life will be held 10:30 a.m. Friday, January 16 at the United Methodist Church in Mount Ayr with Rev. Skip Rushing officiating. Interment will be held at the Fairmount Cemetery in Polo, IL. Please wear your favorite school colors on Friday in memory of Helen’s love of sports.
In lieu of flowers, and in accordance with Helen’s wishes, the family requests that donations and memorials be directed to funds established at the Mount Ayr United Methodist Church, the Mount Ayr Public Library, and HCI Care Services.