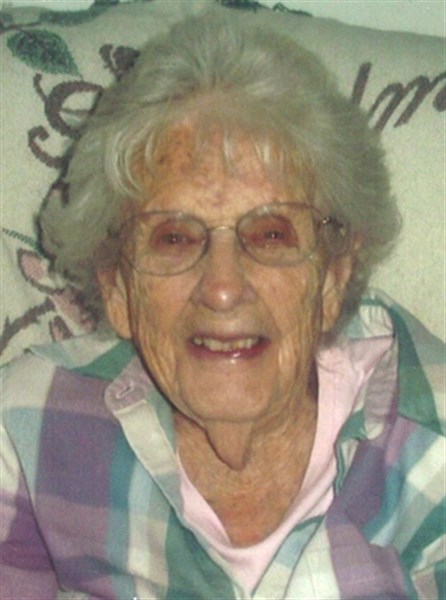 Valiere Stewart, daughter of Floyd and Lela (Whitson) Creveling, was born June 11, 1918 on the family farm south of Ellston, Iowa. She lived most all of her life in this home, with the exception of a few years living within a two mile radius. Valiere graduated from Ellston High School in 1936. On August 12, 1936, in Clearfield, Iowa, she was united in marriage to Aden R. Stewart. To this marriage, five children were born.
Valiere always kept busy. She loved to garden and raised a big crop of food to help feed the family. She was always sewing and she made quilts for nearly every member of her family. Much love and planning went into these quilts and many told stories of the lives of the recipients. Valiere loved flowers and she would protect her gardens and flowers from snakes and other varmints! Valiere was a very good cook and her home was always a place of good food. Many recall that it was biscuits and gravy for breakfast and fried cabbage for lunch. She loved her family and there was always more than enough room in her house for people to eat and stay over. Hunting season was filled with many good memories at her home. Valiere also cooked at restaurants in Mount Ayr and Ellston. Valiere was considered the “God-mother” of the family. She commanded respect and modeled love. Memories of farm life including dressing chickens, raising hogs and on one occasion making sorghum, will be forever shared.
In 2002, Valiere moved to Avery, Iowa and lived the remaining years of her life in the Albia area. Valiere passed away on January 6, 2015 at the Monroe County Hospital in Albia, Iowa. She was preceded in death by her parents; husband Aden on November 28, 1995; daughters Madilene in infancy and Verlea Lantz on September 18, 2014; her sister Ailiene Richards and her brother Lee Creveling.
Those left to cherish her memory include her three sons Dean Stewart and wife Jeanne of Burlington, IA, David Stewart and wife Sheila of Winterset, IA, and Dale Stewart and wife Lorrie of Thayer, IA, son-in-law Bill Lantz of Burlington, IA; grandchildren include Denise Nelson, Tanya Shanstrom, Cherri James, Michael Stewart, Mark Stewart, McKenzie Noard, Mitchell Stewart, Andrea Stewart, Becky Snyder, Jonathon Stewart, Nathan Rigsby, Cody Courtney, and Amanda Atkins; many great-grandchildren and great-great -grandchildren; two sisters-in-law Donella Creveling of Ellston, IA and Ruth Egly of Mount Ayr; several nieces, nephews, other relatives and friends. Watson-Armstrong Funeral Home in Mount Ayr was in charge of the arrangements.
Services were held Saturday, January 10, 2015 at the United Methodist Church in Ellston with Rev. Joel Nau officiating.
Pallbearers were Mitchell Stewart, Ty Noard, Nathan Rigsby, Jonathan Stewart, Michael Stewart and Zach James.
Honorary pallbearers were Mark Stewart, Ron Creveling and Kevin Creveling.
Burial was in the Ellston Cemetery.