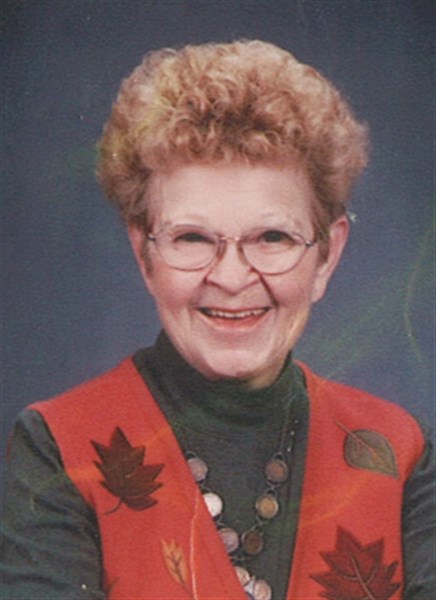 Beulah C. Hutchinson, daughter of Joe and Betty (Alsbury) Hill, was born October 11, 1935 at the family home just outside Allendale, Missouri in Worth County.
Beulah attended rural schools through the eighth grade and then graduated from Grant City High School in 1953 at the age of 16. The caption under her senior picture stated, “Like a stream bubbling over”. The summer that Beulah was 14, she detasseled corn in Clarinda, Iowa for Earl May Seed Company. After her graduation, Beulah attended Missouri Methodist School of Nursing in St. Joseph, MO, graduating in 1956 with a R.N. degree. Beulah worked every weekend at the local hospital in order to pay for her tuition. She was elected “most spirited nurse”. Beulah was a nurse for over 50 years and cared for the citizens of Ringgold County throughout their lifetime. She delivered many babies and supported them as they progressed into their later years. Her nursing skills extended beyond her employment. She was known to take care of neighbors and friends and even got cornered in the grocery store to examine someone’s toe once.
Beulah married Raymond Hutchinson on April 7, 1957 and five daughters were born to this union. Beulah loved people. She will be forever remembered for her laugh and sense of humor; she loved to make people laugh. She loved her daughters and their families; the grandchildren and great-grandchildren were very special to her and she loved them all dearly. The most important people were her family. She loved to cook and family dinners very important to her. Beulah loved dancing and singing and entertaining. Beulah was very active over the years. She was involved in Order of Eastern Star; Red Hat Society; and the First Christian Church. Beulah loved and starred in many Moonlighter Productions. She said, “My Dream was to dance on Broadway with Fred Astaire and that came true when I was able to dance in the “Farmer’s Song” Musical.” She was involved in parent-teachers groups at the Mount Ayr Community School.  Beulah loved to go out for supper and go to the boat with her girl-friends. She had an adventurous spirit and was thrilled to have been able to say she dipped her toes in both the Atlantic and Pacific Oceans.
Beulah had favorite writings that helped her. Her favorite quote was, “It takes a heap of living in a house to make a home”! Her favorite Bible verses came from Ecclesiastes 1; “For everything there is a season; a time to laugh and a time to cry” and John 14.
Beulah entered into the presence of her Lord and Savior on January 14, 2015. She was preceded in death by her parents; her husband; daughter Kayla Hutchinson; brothers Ben Hill, Don Hill, and Bill Hill; and sisters Lacasta Lindsay and Dee (Hill) Norris.
Those left to cherish her memory include her daughters Kelli (Derrick) Bucy of Red Oak, Iowa, Karla (Jerry) Hynes of Creston, Iowa, Karen (Richard) Hanisch of West Des Moines, Iowa and Tracee (Steve) Knapp of Redding, Iowa; grandchildren Lindsay (Chris) Blaine of Cumberland, IA, Damon (Codi) Bucy of Glenville, NE, Lacey (Andy) Frank of Liberty, MO, Melanie Bucy of Maryville, MO, Adam Hanisch of Hornick, IA, Joshua Hanisch of West Des Moines, IA, James (Natasha) Hanisch of Urbandale, IA, Sandra Knapp of Wichita, KS, Lew Knapp, Reas Knapp, and Trace Jet Knapp, all of Redding, IA; great grandchildren Natalie and Nellie Blaine of Cumberland, IA, Harper & Finley Frank of Liberty, MO, Zara and Caden Emick of Jefferson, IA, Tucker and Haiden Bucy and Tanner League, all of Glenville, NE, Hunter, Hannah, Hayden Hanisch, all of Urbandale, IA, and Iaden Aleman of Wichita, KS; siblings Althea Spillman of Bethany, MO, Pat Hill of Cameron, MO, and Edna Magnuson of Apache Junction, AZ; sisters-in-law Shirley Hill of Camden Point, MO, Judy Hill of St Joseph, MO, and Lois Hill of Overland Park, KS; cousins Lou Thornton, Billy Ken, and Pat Wilson; nieces, nephews, other relatives and many good friends.
Services were held Saturday, January 17, 2015 at the First Christian Church in Mount Ayr with Rev. Chris Conklin and Rev. Edward Shields officiating.
Casketbearers included Charlie Spillman, Mark Hill, Jeff Hill, Darren Hill, Eric Hill and Jamie Hill.
A memorial fund has been established for the Mount Ayr Booster’s Club and Mount Ayr Drama Club. Watson-Armstrong Funeral Home in Mount Ayr is in charge of the arrangements.