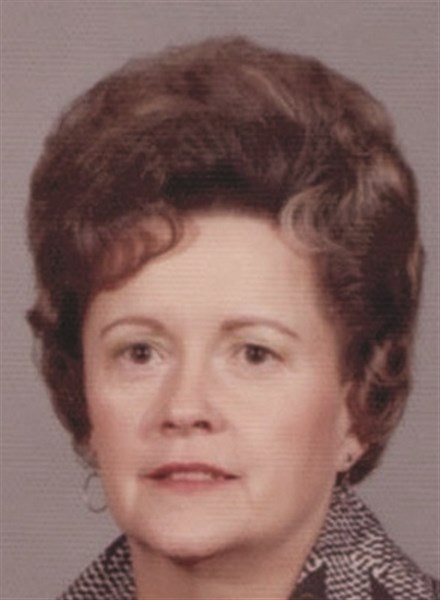 Frances Kathleen House Goff was born January 21, 1923, near Denver, Missouri, to Lester “Burr” House and Katie Porter House and passed away on January 23, 2015, at Mount Ayr Hospital at the age of 92.
Frances graduated from Grant City High School in 1940. She and Harold Goff of Grant City eloped to Kansas City on New Year’s Eve of 1941 and then returned to Grant City to the Goff family farm, which had been settled in 1856, to farm with his parents. Two daughters were born to this union: Beverly Ann in 1943 and Susan Kay in 1948.
Frances had worked at Harrison-Smith Pharmacy in high school and did so again years later.  Following Harold’s death in 1971, she continued management of the farm until her death and managed Andrews Paint Store for several years. Frances was a community leader for many years. She was a charter member of the Grant City PTA, a member of the Honey Grove Extension Club, Sorosis and United Methodist Women and helped start the hot lunch program in the Grant City schools.  She and Harold were both leaders of the Scottish Hornets 4-H Club and both were members of the United Methodist Church of Grant City.  In the 1940’s, they also enjoyed competing with and showing their five-gaited horses in Missouri and Iowa.
Frances was a perfectionist in all she did, from sewing drapes and clothing for her daughters and herself to making pies and cooking for community activities.  Her deviled eggs will be sorely missed and never reproduced.
Frances was predeceased by her parents; sister, Pauline Spainhower; husband, Harold, and daughter, Beverly (Carol) Pickering.
Survivors include: daughter, Susan (Larry) Hauser of Plano, Texas; grandchildren Cindy Green, Mount Ayr, IA; Doug (Barb) Pickering, Grant City, MO; Amy (Greg) Mobley, Maloy, IA; and Jennifer Hauser (Brian) Simpson, Addison, TX; 13 great-grandchildren; seven great-great- grandchildren; nieces, nephews and a host of friends.
In lieu of flowers, memorial contributions to Honey Grove Cemetery in care of Patti Musick, 18817 110th Lane, Grant City, MO 64456, or HCI Hospice Care Services, 107 S. Fillmore, Mount Ayr, IA 50854 will be much appreciated.
The family wishes to acknowledge some of the people who helped Frances live well to the end of her life: the HCI Hospice team, led by granddaughter Amy, who cared for her with great compassion and respect; Marlene, Bob, Travis and Holly Hinz and staff of Maple Ridge, who helped Frances live life fully in recent years and Patti and Drexel Musick, who helped meet many needs on the farm and personally.  There are countless others; you know who you are.
Mrs. Goff’s body has been cremated.Memorial Services were held at 1 p.m. Monday, January 26 at the Grant City United Methodist Church.